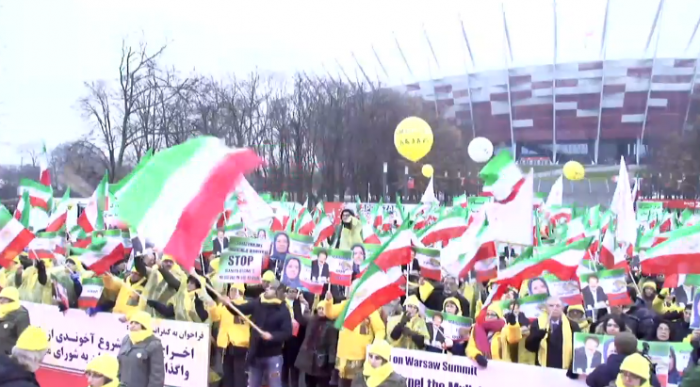 Simultaneous to Warsaw Summit, the MEK supporters gathered near where the conference will be held to express the Iranian people’s devotion to freedom and democracy and demand an end to the policy of appeasement-February 13, 2019

On February 13, 2019, the Iranian opposition came together with communities in Europe and held a rally in Warsaw in solidarity with the Iranian people of Iran.

Simultaneous to #WarsawSummit, join us to be their voice against the #Iran regime's egregious human rights violations & an upsurge in its terrorist acts on European Soil.
Feb.13, 2019, starting at 12:30 pm (GMT+1)#FreeIranWithMaryamRajavihttps://t.co/4zXvdEyfIo

The event marked four decades since the Iranian Revolution in 1979 that ousted the Shah and brought Khomeini to power. Under the mullahs and Khomeini, the Iranian state derided religious plurality, shunned secularism, and abandoned any commitment to upholding human rights.

A Regime on the Brink of Collapse

Now, forty years later, the regime is creaking under the same weight that ousted the Iranian monarchy; the will and determination of the Iranian people.

In 2018, a wave of popular protests swept across Iran, igniting unrest in all 31 of Iran’s provinces and 142 cities, and towns. Like in 1979, these protests drew support from all walks of Iranian life, including the working classes that the clerical regime has relied on for support.

Teachers, farmers, factory workers, students, investors, pensioners, and bazaar merchants have all turned out to vent their frustrations and participate in anti-regime protests.

The driving force behind these protests has been the unrelenting determination of the People’s Mujahedin Organisation of Iran (MEK). Led by president-elect Maryam Rajavi, MEK members have risked their freedom and their lives to coordinate protests, counter the mullahs’ propaganda and disinformation, and stand up for Iranian human rights both within Iran and abroad.

In a statement ahead of the Warsaw rally, Iranian Communities in Europe called the MEK a “pivotal force of the political alternative for future Iran”.

A Rally to Recognize the Iranian People’s Right to Resist

The Warsaw rally takes place ahead of the anticipated Warsaw conference, in which governments from around the globe will meet in Warsaw to discuss strategies to deal with the Iranian threat.

For Iranian Communities in Europe and the MEK, the rally in Warsaw ahead of the conference was necessary to demonstrate to the international community the importance of recognizing the Iranian people’s right to resist and overthrow the regime’s tyrannical brand of religious fascism.

The statement from rally organizers read, “it is time to put an end to four decades of political and social repression, massacres, plunder of Iran’s wealth by the regime’s cronies, and misery and war forced upon the region by this regime.”

“We call on the West to impose sanctions on the regime and include the Iranian regime’s IRGC and MOIS and perpetrators of crimes against the Iranian people on the EU terror list.”

The statement concluded, “It’s time for European countries to align their voices with the voice of the Iranian people and resistance, and to end the nightmare of four decades of the Iranian regime’s atrocities in Iran, the region and the world.”