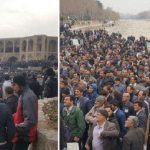 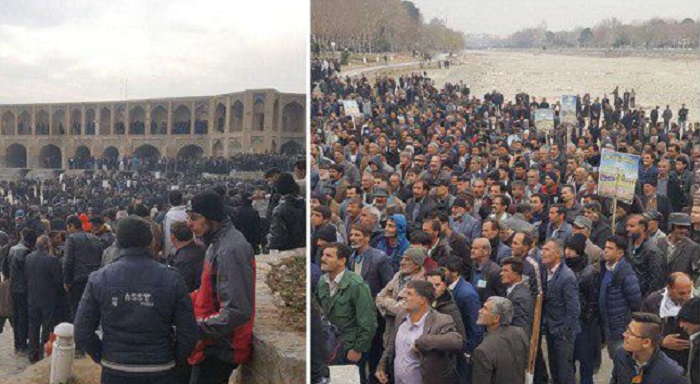 The farmers protest in Isfahan, demanding their water rights has continued despite heavy repressive measure by the Iranian regime security forces.

On Wednesday, approximately 2,000 farmers in Isfahan gathered on the Khaju Bridge to demand their rights to water from the Zayanderud River, MEK sources inside Iran reported.

The protest quickly turned violent after riot police attacked the farmers and their supporters as they marched peacefully through the streets of Isfahan. Many of the protesters were women.

The regime attempted to prevent the protest from occurring and dispatched riot police, plainclothes agents, and security forces to the scene of the demonstration before it began. They also deployed armored vehicles and water cannons to the demonstration site and attacked the protesters, who included elderly farmers. Internet lines in the area were slowed on the day of the protest, and security forces seized mobile devices to prevent footage of the protest and suppressive acts by the regime from being shared online.

Videos posted to social media show riot police clashing with protesters. Further reports indicate that police fired guns into the air to disperse the rally. Several farmers were arrested for taking part in the protest.

Retirees And Farmers Protest For Their Share Of State Money#Iran-ian government retirees in Tehran and farmers in Isfahan held protests on Wednesday, demanding money they believe is due to them from the state.https://t.co/e4hi5MUTH8 #IranProtests pic.twitter.com/VZFjPs50eu

The protesting farmers and their supporters addressed the police, chanting, “Do not support the thieves!”

Videos shared on social media show the farmers persisting in their protest. They chanted:

“Today is a day of mourning because farmers have no livelihood!”
“Death to the oppressor, Peace be upon the farmer!”

Farmer dies, he does not accept humiliation!”

“Victory comes from the God, death to this deceiving government is a deceitful person!

“Even if we die, we will get our water right!”

“Our government is our shame!”

“Liar Rouhani, where is our Zayandeh Rood!”

“Police, beware, we are laborers, not mobs!”

“Our shame is our state Radio and TV!”

The Drying of the Zayanderud

The farmers of Isfahan are angry at the regime because of its construction of dams along the Zayanderud River upstream of Isfahan. The dams have diverted water to factories owned by the regime and IRGC-controlled companies and led to the drying of the river in the Isfahan region. The once-prosperous Isfahan farmers have been left without water to irrigate their crops. Agriculture is the primary industry in Isfahan, so the scarcity of water affects virtually all of the people living in the region.

The protesting farmers are demanding that the regime open the Zayanderud River so that it may once again flow to their farmland. They are also protesting against the regime’s failure to follow through on previous promises made to the farmers.

Mrs. Maryam Rajavi, President-elect of the National Council of Resistance of Iran (NCRI), saluted the hardworking farmers of Isfahan for their protests against the regime’s oppression and discrimination. In her statement, she said that suppressive forces are trying in vain to stop the protests by deploying suppressive forces, imposing restrictions, and arresting protesters.

Hail to the retirees & people who held their protests today across from the mullahs’ parliament against oppression and discrimination. Repressive forces tried to stop the protests by imposing restrictions and making arrests, to no avail. The protests and uprisings carry on.#Iran

Mrs. Rajavi called upon the people, particularly the youth of Iran, to support the protests, and said that the uprisings led by the people and the MEK’s resistance units will continue until they are victorious.