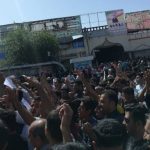 Regime Agents Interfere with Ceremonies to Honor Martyrs of Uprisings 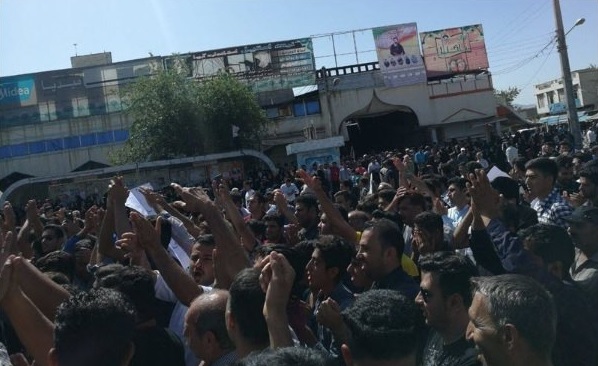 Archive photo- Funeral Ceremony For 3 Martyrs Of Kazerun Uprising, With Chants Of: Death To The Dictator; Oh, My Martyred Brother, We’ll Continue Your Path; My Imprisoned Brother Must Be Freed

December 28th marks the one-year anniversary of the Iranian uprisings, a massive series of popular protests and demonstrations against the clerical regime which spread to over 140 cities and every province in Iran over a two-week period. The uprisings, which shook the Islamic Republic to its core, started a protest movement that continued a year later and threatens to topple the regime.

The uprisings also forced the Iranian regime to acknowledge the influence of the MEK within Iran. The MEK has been instrumental in organizing and leading the popular protests that have taken place throughout Iran over the past year. The mullahs, who have long claimed that the MEK is a fringe movement with little influence within the country, has been forced to admit that the MEK is a powerful force within Iran.

The Islamic Revolutionary Guard Corps (IRGC) is using this occasion to take a series of suppressive measures against the families of those who were killed during previous uprisings by the Iranian people. The regime hopes that these acts of suppression will stop the ongoing protest movement from spreading further and prevent another uprising.

MEK sources report that IRGC intelligence agents summoned family members of martyrs of the 2017 uprising. The family members, who live in the city of Dorud in Lorestan Province, southwest Iran, were told not to conduct any interviews with foreign or domestic media outlets or to speak about what happened to their family.

The IRGC agents also prohibited the martyrs’ families from holding public ceremonies to honor their loved ones. Families were told they could only hold private ceremonies with prior permission from the IRGC. Further, IRGC agents must be present at the ceremonies. 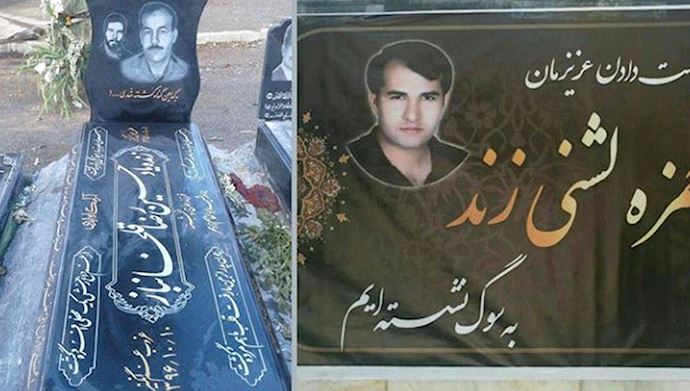 Graves of protesters killed by Iranian security forces in December 2017 protests. Hamze Lashni-Zand (photo on the right) was martyred in Dorud

Also in Dorud, family members of Hamze Lashn, who was martyred in the December 2017 uprisings, held ceremonies at his home and the cemetery in his honor. The ceremonies took place under heavy security measures by security and intelligence agents, who prevented people from outside of the family, particularly young people, from participating in the ceremony.

Family members of Hossein Reza Gholkhanbaz living in the city of Tuyserkan in Hamadan Province held a ceremony in memory of the martyr of the December 2017 uprisings. The ceremony was disrupted when IRGC agents stormed their home and arrested some of Gholkhanbaz’s family members.

The family of Abbas (Shahram) Farajzadeh Tarani, who was killed in the December 2009 uprisings, planned to hold a ceremony in his honor but were prevented from doing so by Ministry of Intelligence and Security (MOIS) agents. According to Abbas Farajzadeh’s sister, “Regrettably, agents of Ministry of Intelligence and Security (MOIS) called me and canceled the late Shahram Farajzaeh’s ceremony and emphasized that they would cause legal problems for us and for our guests if we did not cancel the ceremony.”
Staff Writer