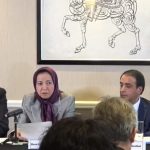 On Sunday, December 16th, the Daily Caller published an op-ed by Kenneth Maginnis, a member of the United Kingdom’s House of Lords. Maginnis’ article, entitled “2019 Brings New Opportunity to Topple the Iranian Regime”, urges policymakers and legislators around the world to re-examine their stance towards the Iranian regime in light of the developments of 2018.

A Year of Change

Maginnis points out that one year ago, “the 2015 nuclear deal was in full effect”, “Iran’s domestic situation appeared relatively stable”, and “the Iranian threat to Western nations was largely theoretical and vaguely defined”.

Now, twelve months later, the Us has re-imposed sanctions, Iran’s domestic situation is increasingly unstable, and “the United States and Europe have faced down at least four terrorist plots targeting Iranian activists on Western soil”.

The Trump administration’s shift away from appeasement and adoption of a tougher stance towards the Iranian regime has been welcomed by the Iranian opposition and the People’s Mujahedin Organisation of Iran (MEK). However, Europe has been reluctant to follow T

Sanctions Could be on the Horizonrump’s lead.

That could be changing. Following further ballistic missile testing from the Iranian regime, the UN Security Council conducted a meeting which Maginnis says was at the request of the French and UK governments.

Following a foiled Iranian terror attack in Paris this summer, the French government conducted an investigation into Iranian state-sponsored terrorism in Europe. The investigation concluded without any doubt that the Iranian regime’s leadership was involved in the planning and execution of the June 30th plot.

After the conclusion of this investigation, there have been signs that the European Union may be rethinking its position and considering sanctions. 150 Members of the European Parliament (MEPs) recently signed a statement calling for the expulsion of all regime agents involved in state-sponsored terrorism from European soil.

In addition to international isolation, the regime’s position in power looks increasingly uncertain. The Iranian opposition and the MEK has had a major role in the spread of mass anti-government demonstrations in 2018. Demonstrations that Maginnis asserts, “the Iranian regime has been struggling to contain”.

What began as a huge nationwide protest that affected all of Iran’s major towns and cities in all 31 provinces, has splintered into numerous demonstrations affecting all of Iran’s key industries, including the steel industry, sugarcane, universities, teachers, logistics, and retail sectors.

.@Maryam_Rajavi on #Nowruz celebration: The #NewYear can and must be turned into a year full of uprisings
#FreeIran #Iran#MaryamRajavi#firstdayofspring#PersianNewYear#نوروز #۹۷بابراندازانhttps://t.co/vK1HPN6Rsx pic.twitter.com/MITiWlEiIi

Prior to 2018, the MEK’s leader, president-elect Maryam Rajavi, called for 2018 to be a “year full of uprisings”. It has not disappointed.

Even with the rampant protests taking place daily across Iran, Western policymakers have been slow to react. However, the situation is reaching a tipping point. Maginnis writes, “the evolution of Iran’s domestic situation has provided the world with an unprecedented opportunity to effectively confront this threat while also helping the Iranian people to bring about change in their country”.