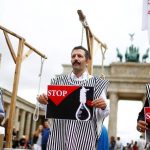 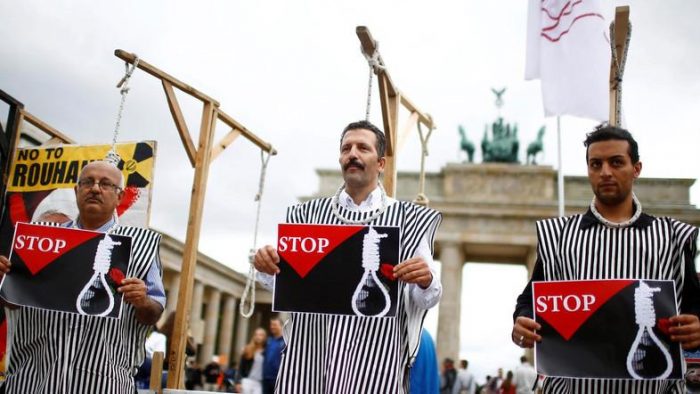 Archive Photo: Supporters of the MEK, participate in a demonstration in Berlin, calling for an end to executions in Iran.

Two prisoners in regime custody at Karaj and Bandar Abbas prisons were hanged on Saturday, December 8th. Jamshid Agharahimi and Behzad Adib were both convicted on murder charges. Adib was adamant that he was innocent of the crimes he was charged with and repeatedly asserted his innocence even after he was taken to Karaj Central Prison for his execution.

A String of Executions

The two executions were the latest in a string of regime state-sanctioned killings. On Thursday, the 6th of December, the regime executed 12 prisoners in Kerman. Four were of the Baluchi minority.

Similarly, at the end of November, three prisoners were publicly hanged in Shiraz. The People’s Mujahedin Organisation of Iran (MEK), published a video taken by an eyewitness which clearly showed the accused standing on the back of pickup trucks with nooses around their necks. They had hoods placed over their heads.

The three men stood convicted of “moharebeh” charges. These charges, loosely translated as “waging war against God”, are often used by the regime to execute political dissidents on arbitrary, jumped-up charges.

In mid-November, the regime also executed 10 prisoners in Gohardasht Prison in Karaj province.

The regime’s use of the death penalty has come under scrutiny in recent months. The UN General Assembly’s Third Commission issued a statement condemning the regime’s use of the barbaric form of punishment. It expressed concerns over the “alarmingly high frequency” at which the state puts people to death.

The General Assembly also took the opportunity to raise concerns over the “widespread and systematic use of arbitrary detention” and poor prison conditions, citing reports of the regime “deliberately denying prisoners access to adequate medical treatment” and “cases of suspicious deaths in custody”.

Iran Human Rights Monitor also recently released its annual report for 2018. Within the report, the human rights advocacy group found that the regime had employed the death penalty in 285 cases this year, including against political dissidents, and in cases where the alleged perpetrator committed the alleged crime under the age of 18.

The report shed light on the Iranian regime, which executed more citizens per capita than any other regime on earth. The Iran Human Rights Monitor report also found that ethnic minorities, including the Arab, Baluch, and Kurd minorities, were heavily overrepresented among execution cases.

I call on my fellow countrymen and women across the nation to stand up and actively resist against the executions and arrests, and prevent the ruling mullahs from making use of this criminal tool through every possible means.
#NoToExecution #Iran

The MEK and the president-elect Maryam Rajavi, have unequivocally condemned the regime’s use of the death penalty in all cases. It stands for the abolition of capital punishment in Iran and an independent judiciary to administer punishments independent of government interference.