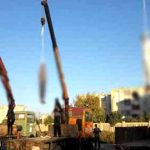 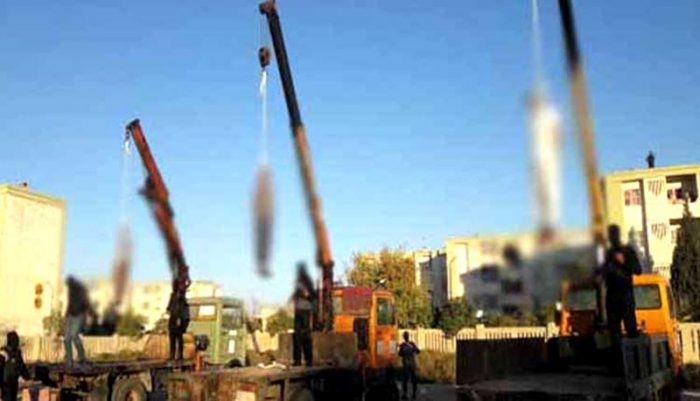 A scene of a public hanging in Iran.

On Wednesday, November 21st, as the morning sun beat down on the beige buildings, three blindfolded men were led into the middle of a public square. Around them, masked men readied several nooses. Another masked man shouted their charges through a megaphone.

The three prisoners, the masked man exclaimed to the small group gathered in attendance, were accused of “moharebeh” or “fighting with God”. The charge is increasingly being used by the clerical regime in Iran to arbitrary try its political opponents.

The Nov. 21 barbaric public executions in city of Shiraz is a futile ploy by the regime to sow fear and terrorize the citizens as the nationwide support for the workers' expanding protests in Shush and Ahvaz is growing.#IranProtests #Executionhttps://t.co/mD4vTQ26rX

In December, a court upheld the death penalty for Swedish resident, Ahmadreza Djalali over the same accusations. Several arrested during the December and January protests have also been charged with the same “moharebeh” umbrella charge.

The three men in Shiraz are forced aboard trucks, carefully positioned so the flatbeds lie underneath the pre-arranged nooses, on their flanks are three further masked men. Escape is not an option.

In a brutal act of suppression and violence, the three men were hanged in the sunlit square, in full view of the Iranian public.

The events that took place on Wednesday in Shiraz are not an isolated incident. Across Iran, unlawful public hangings like these are becoming increasingly common. Between January and June this year, the clerical regime executed 176 Iranian citizens.

The increasing use of the death penalty, including in cases against minor offenders who committed their crimes under the age of 18, is a sign of the increasing peril the regime finds itself in.

Alongside the surge in executions, has been a surge in anti-regime protests. Most recently, the brave workers at Haft Tappeh sugar factory took to the streets over the regime’s forced privatization of the company. Similar, the workers at Ahvaz Steel also went on strike in protest over the regime’s oppression and mismanagement.

The Iranian regime has always responded to civil unrest with violence and repression. The People’s Mujahedin Organisation of Iran (MEK), Iran’s largest and most popular political opposition group, was on the receiving end of this violence and oppression every time it threatened the regime’s future in power.

The most violent of all these responses took place in 1988 when the regime executed more than 30,000 MEK members in regime custody.

In response to the Iranian regime’s widespread use of violence and executions to ensure its future survival, international NGOs and human rights groups have lined up to condemn the mullahs and their Supreme Leader Khamenei.

The MEK, the Iranian resistance, the High Commissioner for Human Rights, the Special Rapporteur on human rights in Iran, and the rapporteur on arbitrary executions have all spoken out against the regime’s arbitrary application of the death penalty.

They have called for the immediate cessation of this medieval and inhumane form of punishment.