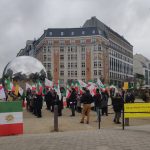 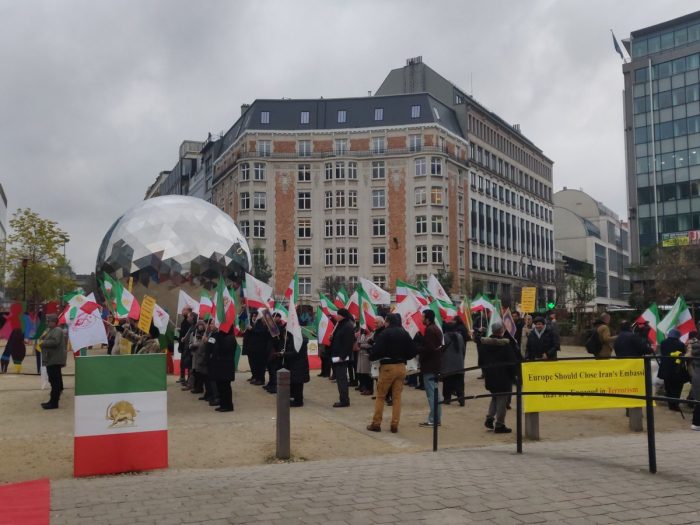 The Iranian diaspora protest near the European Parliament in Brussels, demanding rough measures against the Iranian regime’s terrorist activities in European soil.

On Monday, November 19th, members of the Iranian diaspora, supporters of the MEK, Iran’s principal opposition organization, gathered in Brussels to call for firm action following the Iranian regime’s string of foiled terror plots on European soil. The protests took place in front of the headquarters of the European Union as the Council of Ministers met inside.

A Surge in Iranian Terror Output

2018 has seen a marked increase in the Iranian regime’s terror operations. Since January, there have been several attacks planned in Albania, Denmark, France, and the US, the most severe of which saw an attack involving a car laden with explosives due to attack the People’s Mujahedin Organisation of Iran’s (MEK’s) annual Grand Gathering event in Paris. Fortunately, the plot was thwarted in the late stages by European authorities.

Protestors in Brussels recognize that these attacks pose a significant threat to members of the Iranian opposition, the MEK living abroad. They also constitute a significant danger for citizens of Europe.

Many of the regime’s terror attacks have involved explosive devices planted in public places. These types of attacks kill indiscriminately and wreak extensive destruction on the local populations as well as the intended targets of the regime’s attacks; the MEK.

The exiled Iranians that gathered in Brussels also expressed their solidarity with the workers within Iran calling for an end to corruption. Recent strikes in Iran featured teachers, sugar cane factory workers, steel workers, truck drivers, and merchants. They all protested appalling working conditions and epidemic corruption among the Iranian leadership that is crippling the nation’s industries.

Where to go from here?

To end the Iranian regime’s terror activities abroad, the EU must first cripple its espionage network.

Thanks to a report from the MEK and the National Council of Resistance of Iran (NCRI), the world is now aware of the nefarious role Iranian embassies and diplomats play in this espionage network.

In the case of the foiled attack in Paris, a diplomat working at the regime’s Austrian embassy was the mastermind behind the planned car bomb attack. Assadollah Assadi was arrested by German authorities traveling back to Austria after he provided a Belgian-Iranian couple with the necessary explosive material for use in the attack.

As a result, 150 members of the European Parliament (MEPs) signed a statement calling for the immediate expulsion of all regime intelligence agents from the EU.

Addressing the protestors in Brussels today, Hamad Reza Taaheerzadeh spoke of the need to expel Iran’s terrorist diplomats from the embassy enclaves across Europe.

Counter-Terrorism and Middle East Specialist, Claude Moniquet, also addressed the crowds. He told protestors that the Iranian opposition now has a unique chance to “condemn the Iranian regime and put the light on the true nature of this regime and [its] criminal behavior”.

There are currently several Iranians in detention in Belgium, including Assadollah Assadi, awaiting trial over their involvement in the planned terror attacks.

The protestors called for Europe to follow the US’s lead and introduce strict sanctions against the Iranian regime.

They argued that only by adding the regime’s Ministry of Intelligence and Security (MOIS) to the EU’s terrorist blacklist and reintroducing strict sanctions against its leadership can Europe bring an end to the Iranian regime’s campaign of terror.

Their comments are echoed by leading EU politicians, including the Former Italian Foreign Minister, Giulio Terzi, who believes a policy of maximum pressure towards Iran is the only solution.