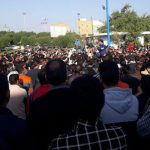 MEK: Haft Tappeh and Ahavaz Steel Workers Take to the Streets in Protest 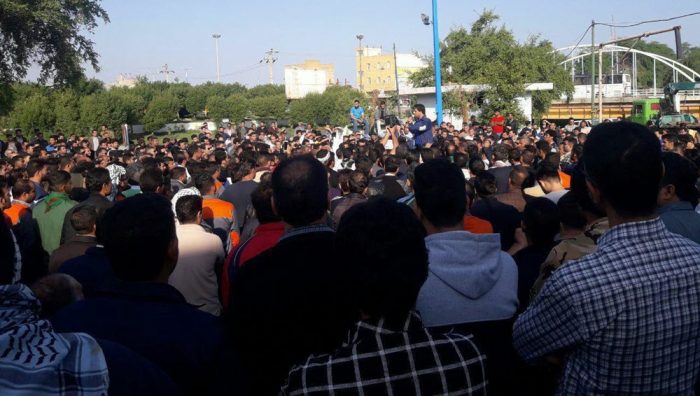 The people of the city of Shush (SouthWest Iran) take it to the street to object the Iranian regime’s repressive measures against Haft-Tappeh workers.

On Saturday, November 17th, people gathered for a demonstration outside the Haft Tappeh Sugar Cane Mill in Shush. Amongst the crowd was students, workers, women, and families, as they marched from the mill to the governorate office.

The protestors showed defiance in the face of extreme suppression and violent threats from the regime. The mullahs had deployed riot police and other security measures across the city, reminding protestors of the constant dangers of living under one of the world’s most repressive regimes.

As they walked, the protestors came together in chants of, “we are workers of the Haft Tappeh, we are hungry, hungry”. Some of their other chants were directed at the regime itself. Many shouted, “down with the oppressor”, “the betrayal of the authorities must be announced”, and, “we do not want incompetent officials”.

A Population Racked with Poverty

The workers from Haft Tappeh, like so many other segments of the Iranian workforce, are facing unemployment, poverty and widespread hunger.

When the crowd reached the governate office, they put up empty tables, symbolic of the tables in their homes which lie empty when the workers cannot afford to feed their families.

The Haft Tappeh workers have been on strike in protest over unpaid wages and the unnecessary privatization of the company.

Reports by the MEK network inside Iran indicate that the sugar workers of Haft Tappeh were not alone in their protests of Saturday. At the same time, steelworkers in Ahvaz also gathered in front of their governorate offices in protest at four months’ worth of unpaid wages.

They called for payment of their wages, better working conditions, and occupational safety. Their slogans also attacked the regime and expressed solidarity for their brothers and sisters striking outside Haft Tappeh.

They read, “steel, Haft Tappeh, unity, unity”, and, “down with this deceiver government”.

Support from the Iranian Resistance

Both of the strikes drew support from the Iranian opposition movement.

The president-elect of the Iranian opposition, Maryam Rajavi, issued a statement of support for the demonstrators, particularly the women who had braved the regime’s threats and turned out anyway.

Rajavi said, “leadership of women in the strikes of Iranian teachers and workers is a pride and flares up the flames of uprising and justice”. She added that the workers in Haft Tappeh and Ahvaz Steel were a voice for freedom and justice in Iran.

Hail to the vanguard women among sugarcane workers in Haft Tappeh. With chants of “workers die but will not succumb,” they demanded their rights and freedom.#IranProtests #Iran#FreeIran2018

Finally, Ms. Rajavi and the MEK called on Iran’s youth to rise up in support of these brave men and women at Haft Tappeh and Ahvaz Steel. She also called on international human rights organizations and trade unions to lend their support.