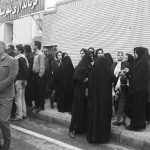 Wednesday marked the tenth consecutive day of strikes for workers at the Haft Tappeh Sugarcane Company. The workers have been on strike since November 5th to protest not receiving their wages for the past four months. They are also protesting the privatization of the company.

Nov 13 Ahvaz #Iran
The strike of Haft Tappeh Sugarcane Factory has continued for the 8th consecutive day in protest to not receiving their wages & the privatization of the company.They chanting:
“dignified workers, don’t accept humiliation.”#IranProtestspic.twitter.com/nsTyzmTURU

The striking workers rallied outside of the Shush Governor’s Office for the second day to protest. The MEK network shared videos and images of the strike on social media. In videos, workers chanted, “Down with tyrants, long live workers!” and “People of Shush, support us!”

The workers’ chants also referenced the ongoing strike by Ahvaz Steel Company workers, which has been in progress since November 10th. The workers chanted, “Thank you steel workers!” in solidarity with their fellow striking workers.

According to the state-run ILNA news agency, almost 1,000 workers took part in the protest. 2,700 workers at the Haft Tappeh Sugarcane Company have gone without wages for four months, according to one protester who was interviewed by ILNA. “Unfortunately, the employer has no reaction to the workers’ unpaid wages and we are waiting to see whether they will take any real measures,” the protester said.

ILNA published a picture of workers with a banner reading, “Please order the city bakeries to lend bread to Haft Tappeh workers. Workers of Haft Tappeh are hungry.”

The Haft Tappeh Sugarcane Factory, the oldest sugar factory in Iran, was privatized in 2015. Since then, debts at the company have risen, and workers have become progressively poorer. According to official reports, factory workers have lost 80% of their purchasing power over the past few months, and the company is considering laying off workers.

Jafar Azimzadeh, head of the Free Union of Workers in Iran, characterized the condition of the factory workers as “slavery.”

“The families of some workers have to buy bread on credit, because of unpaid salaries and if this situation continues, even bakeries will refuse to sell bread to the workers on credit,” he said.

Factory workers at the Haft Tappeh Sugarcane Company have gone on strike several times this year, due to unpaid wages and unfulfilled promises by their employer. The most recent strike took place in August and involved 500 striking workers who had not been paid for three months. According to reports from the MEK network, riot police beat protesters and used tear gas. Five striking workers were arrested and charged with “disrupting order.”  They were later released.

Mrs. Maryam Rajavi, President-elect of the National Council of Resistance of Iran, commended the striking workers, tweeting: “Hail to the deprived workers of Haft Tappeh Sugarcane Factory and Steel Factory of #Ahvaz who have risen up to demand their rights, calling for expansion of the protests by the slogan of “Workers of Khuzestan, unite, unite.”
#IranProtests”