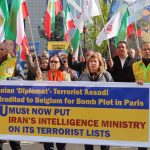 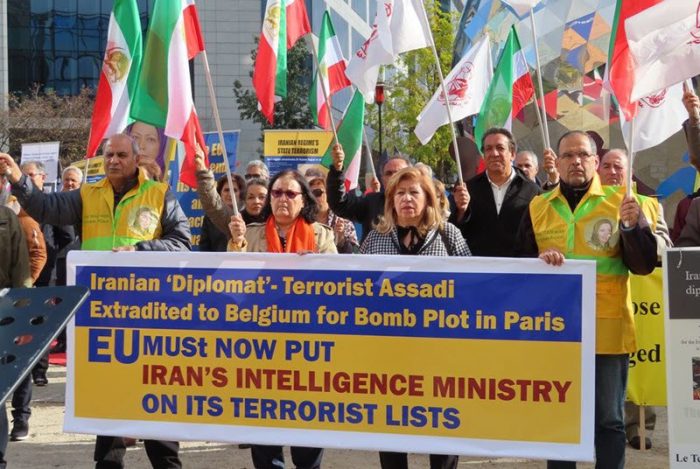 MEK supporters (main body of the National Council of Resistance of Iran-NCRI) protest the recent surge in executions in Iran and the spread of regime terrorist activities in Europe-Brussels, October 2018

MEK supporters in Europe have joined the Iranian people in their protests against the mullahs’ regime by staging demonstrations in London and Belgium.

On Sunday, protesters demonstrated outside of 10 Downing Street in London to protest the recent surge in executions and human rights violations by the Iranian regime, particularly those that are occurring in Iranian prisons, as well as their terrorist acts against the MEK. The protesters also showed their support for the protests and strikes currently taking place in Iran.

The demonstrators also hope to draw attention to the 1988 massacre of 30,000 political prisoners by the Iranian regime. The executions, which occurred over the course of a single summer, have never been investigated, and their perpetrators have never been brought to justice.

20/10/2018 – Supporters of the main Iranian opposition, the PMOI, demonstrated outside Downing Street against the use of the death penalty in #Iran.
Grateful that protesters from the #PeoplesVoteMarch showed their support upon passing us #FreeIran #BrexitMarch pic.twitter.com/AdocljuVja

Protesters at the rally chanted: “Down with Rouhani! Down with Khamenei!”

A group of British dignitaries and representatives of the Iranian diaspora in the U.K. were present at the demonstration and gave speeches. The speakers called on the international community to hold the Iranian regime responsible for its acts of terrorism against the MEK, for its violent suppression of the popular uprising currently taking place in Iran, and for its exportation of terror.

In her speech, NCRI supporter Naghmeh Rajabi said: “There needs to be more pressure to bring a halt to all of these executions, especially the public hangings that are happening.

Children, people, normal people are walking in the streets and they see bodies hanging from cranes. That’s kind of becoming a normality in Iran and it is completely unacceptable in the twenty-first century.”

The speakers also emphasized the need to blacklist the Ministry of Intelligence and Security (MOIS) and the Revolutionary Guards (IRGC), especially after the foiled terrorist attack on the Iranian opposition gathering in Paris on June 30th of this year.

On Monday, MEK supporters in Brussels demonstrated outside of the European Union headquarters to protest executions, human rights violations, repression of women, and terrorist acts against the MEK in Europe by the Iranian regime.

The protesters called upon the E.U. to end the policy of appeasement toward the mullahs’ regime and to blacklist the Ministry of Intelligence and Security (MOIS) and to expel all regime diplomats.

The Belgian news agency Belga, Dubai TV, and Al Arabiya all covered the rally. Reports from each news outlet included coverage of the June 30th foiled attack on the National Council of Resistance of Iran (NCRI) gathering in Paris and the regime’s culpability in the terrorist plot.

The Iranian community in Brussels protested on Monday calling for #Iran’s Ministry of Intelligence to be placed on the #EuropeanUnion’s terror black list four months after a plot by Tehran to attack an opposition rally in Paris.https://t.co/orOwJdx0Kr

The Belga report read, “The demonstrators accused Tehran of blueprinting this plot.”

Al Arabiya published a report summarizing the plot to attack the NCRI gathering and the arrest of regime diplomat Assadollah Assadi for allegedly masterminding the plot. In October, a report by French intelligence concluded that there was “no doubt” that the Iranian regime ordered the terrorist attack. Assadi is currently in Belgium awaiting trial on terrorism charges resulting from the terrorist plot.

Former MEP Paulo Casaca was one of many dignitaries to speak at the rally. In his speech, he said, “I was among the people who were there on June 30. So I can say that, even personally, I have a case here to the European External Action Service (EEAS) and there has not been a single word from the EEAS on the issue.”

The protesters condemned the European Union for not speaking out against the regime’s human rights abuses.

We expect EU today to break the silence. We want EU to be active and to be on the side of Iranian people,” said NCRI member Firouz Mahvi