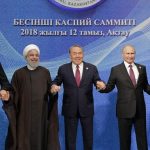 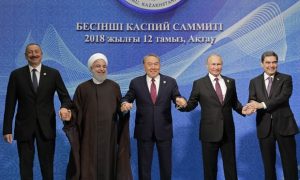 The Caspian Sea summit, during which Rouhani gave away the Iranian people’s share of the Caspian Sea-August 2018

This is just the latest move by a struggling regime fighting to maintain its tenuous grasp on power. The treaty has been met by widespread condemnation within Iran, as it clearly undermines the national interests of Iran and its people. Desperate measures that undermine the Iranian people are often used by the regime, who will go to any lengths to preserve the totalitarian rule of the vali-e faqih (absolute clerical ruler).
The regime wasted one trillion dollars in damages from its war with Iraq; it continues to plunder the wealth of the Iranian people with constant warmongering, exportation of terrorism, and its nuclear and missile programs; it spends millions of dollars targeting the MEK with smear campaigns meant to delegitimize the resistance movement; it destroys the environment; and it has dried up the nation’s water reserves through its mismanagement and incompetence.

The regime has now set its sights on the Caspian Sea, one of Iran’s greatest national treasures. The mullahs, in their most recent attempt to hold onto their rule, have given away Iran’s claim to a large portion of the sea.

The treaty is so unpopular that criticism has even come from experts within the regime and parliament deputies from different regime factions, who have characterized it as another Turkmenchay Treaty. (The Turkmenchay Treaty of 1828 ceded control of the South Caucasus to Russia.)

On August 12, 2018, the state-run daily, Etemad, quoted a Majlis Deputy, who said, Given the timing and particular political circumstance, negotiations about our share of the Caspian Sea and similar issues do not serve our interests.”

A second Majlis was quoted as saying, “Rouhani has gone to Kazakhstan at a time when the legal provisions of the Caspian Sea are in doubt. Is it true that Iran’s 50 percent share has dropped to 11 percent? Is there another Turkmenchay on the way?”

The Islamic Revolutionary Guards Corps (IRGC) defended Rouhani’s decision to sell out the Iranian people, writing in its publication, Javan, on August 13th that “[e]xpectations for favorable terms regarding our rights to profit from, or making use of the Caspian Sea’s reserves in ‘determining the borders’ and ‘setting a demarcation point’ are unrealistic.”

Maryam Rajavi, President-elect of the National Council of Resistance of Iran (NCRI), responded to the treaty, saying: “For Khomeini, Khamenei and Rouhani, neither water, nor the land, nor the culture, nor the lives, nor the wealth of the Iranian people have any value. Only one thing matters: Preserving the rule of the mullahs, which Khomeini described as the ‘absolute imperative,’ and for which one can abrogate Islamic edicts, and first and foremost give away the land and water of Iran and its people and massacre its valiant children in the prisons.”

Mrs. Rajavi added, “Indeed, what could an invader do that the mullahs have not done to Iran and the Iranian people. The mullahs are among the worst in Iran’s history.”