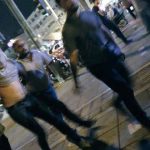 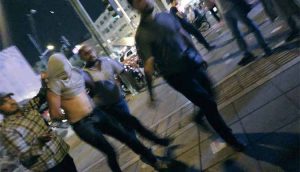 A report based on MEK network inside Iran on the regime’s suppression of the recent protests in Iran was published recently. The protests are part of a larger uprising that has grown from economic unrest due to the fall in the value of the rial as U.S. sanctions are set to resume. Calls for regime change have been widespread among protesters in cities across the country.

were dispatched to the scenes of the protests to disperse the gatherings and subsequently beat and arrested unarmed protesters. A young man identified by the MEK network as Reza Otadi was shot and killed by security forces while protesting in Gohardasht, Karaj on August 3rd.

The MEK network has prepared a fact sheet about acts of suppression by security forces during the recent protests. The information initially published by Iran HRM has been summarized below:

Shiraz: The regime’s police force fired tear gas onto the protesters, hitting a seven-year-old boy in the face.

July 31
Shiraz, #Iran
As #IranProtests continue, the Iranian regime police force in Shiraz fire teargas into the faces of children. A truly disturbing scene… People are trying to help him overcome the pain. @SimonAdamsR2P @UNPOintl pic.twitter.com/k4zJEh7HIo

Isfahan: Suppressive forces maintained a heavy presence in the main streets of Isfahan, there were attacks on protesters in several areas. Protesters who had gathered underneath a bridge were also attacked by riot police.

Security forces in Noavaran Square stood in a row in front of protesters to attempt to block their path, then used water cannons on them to push the crowd back and disperse them. In another area, security forces clashed with protesters, firing tear gas and bullets into the crowd.

Karaj: Protesters were beaten by riot police and security forces.

Isfahan: Riot police fired tear gas and pellet guns into a crowd of protesters. The protesters responded by throwing rocks at the police. The police subsequently fired live ammunition into the crowd, shooting a young protester in the leg.

Ahvaz: Agents of the regime attacked small groups of people who were standing on the street.

Shiraz: A heavy security presence was in place in Shiraz. Security forces on motorcycles attempted to intimidate protesters by patrolling the area and attacking protesters. Plainclothes agents attacked protesters as well. Riot police fired tear gas into the crowds. Undercover agents went into the crowds of protesters to detain participants.

Karaj: Protesters were attacked on the streets by Bassij forces. Riot police fired tear gas at protesters. As night fell, riot police attempted to intimidate the protesters by marching on the street with motorcycle police following behind them.

Mashhad: Police shot tear gas at protesters from motorcycles and from on foot. A number of protesters were detained.

Shahin Shahr, Isfahan: Riot police shot tear gas into crowds of protesters, as police assaulted protesters with their batons. Riot police attempted to intimidate the protesters by patrolling the streets on motorcycles. Protesters were attacked by Bassij forces.

Karaj: A large presence of security forces of all types was dispatched to the protests in Karaj. Many riot police were on the scene to fire tear gas and pellet guns into the crowds of protesters. Riot police also assaulted the protesters. Bassij forces, Revolutionary Guards Corps agents, and plainclothes agents attacked protesters with batons. Security forces shouted their support for the regime’s Supreme Leader while they beat the protesters.

Security forces opened fire into the crowd. A young man, identified as Reza Otadi, was killed by security forces in the protests. Another young man was shot in the arm and taken to the hospital for treatment.

Tehran: A heavy security presence was active in Tehran, with a large number of both police and plainclothes agents. Police arrested a number of people in Valiasr Square, both men and women.

People who filmed the protests with cellphones were arrested. Police attacked a number of people with batons and Tasers, singling out women.

Karaj: About 100 Bassij forces and Intelligence agents posed as protesters during the day, wearing masks and participating in the protests. As night fell, riot police attacked on motorcycles and the undercover agents began arresting people, pulling the protesters’ shirts over their heads and forcing them onto a bus.

Eshtehard, Karaj: Protesters who had gathered outside of the Eshterhard Seminary were attacked and detained by security forces.

Security forces were positioned in every major street to prevent any gathering.

Internet lines were slowed and then completely shut off for a few hours overnight. Nothing could be sent out.

Karaj: A water cannon and several different armored vehicles were brought into the streets, along with at least 30 security forces on motorcycles and almost 50 plainclothes agents in masks. All of the streets leading to Gohardasht were barricaded with cement barrier blocks. Cameras were installed in strategic locations to identify protesters. Security forces threatened store owners around Gohardasht and told them to close their shops. Bassij forces were armed with sticks, agents carried batons and other equipment, plainclothes agents carried weapons under their clothes to beat protesters. Security forces beat and detained a number of protesters. They shot tear gas into the crowd at frequent intervals. In other areas of Tehran, riot police and tanks were brought out.