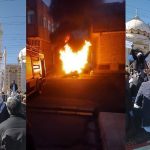 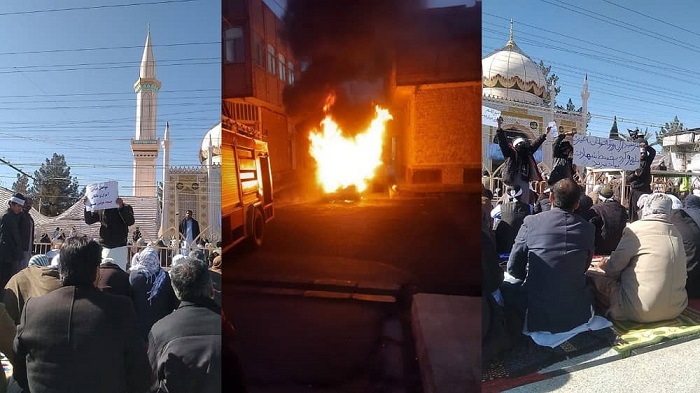 Courageous youths identified a regime informant during the rally and punished him.

On Friday, January 23, marking the 120th day of the nationwide uprising, the brave people of Zahedan again came out onto the streets following the Friday prayer congregation and chanted anti-regime slogans, including, “Death to Khamenei, death to the IRGC, death to informants”, “death to the oppressor, be it the Shah or the Leader (Khamenei)”, “no to monarchy, no to theocracy, yes to democracy and equality”, “Shame on Khamenei, Leave the country alone”, “This is the final message, one more execution, there will be an uprising”, “I shall kill whoever killed my brother”, “death to the hanging republic”, “death to the Islamic republic”, “Freedom, freedom, freedom”, “More and more crime, down with theocracy”, “death to the principle of the Velayat-e faqih (absolute clerical rule” and “death to the regime’s mercenaries”.

The brave women of Zahedan played an active role in this demonstration as in previous weeks. Protesters carried placards that read: “From the blood of our country’s youths, tulips have grown”, “I was burned because I was a fuel porter, I was targeted because I was a Baluch”, and “eye for an eye”. The suppressive forces, on alert since the night before, blocked the Khayyam junction, Beheshti, and several other streets to arrest the young protesters.

In the cities of Khash and Rask, people protested with anti-government slogans after Friday prayers. The people of Khash chanted “Death to Khamenei”, and the people of Rask protested the regime’s abduction of the Friday prayer’s leader of this city.

Last night, several brave youths and families of prisoners gathered in front of Gohardasht prison in Karaj until dawn to prevent the execution of Mohammad Qobadlou, one of the detainees of the uprising.

January 13 – Zahedan, southeast #Iran
Protesters chanting: "I will kill those who killed my brother!"#IranRevolution2023#زاهدان pic.twitter.com/PtGgK5PfYO

The chant of “Death to Khamenei” could be heard echoing from the buildings in Tehran’s Ekbatan district. The defiant youths set fire to a Basij base in Bandar Anzali and a banner carrying Khamenei’s picture in Bushehr’s Jam neighborhood.

Mrs. Maryam Rajavi, the President-elect of the National Council of Resistance of Iran (NCRI) hailed the brave Baluchi protesters in Zahedan, Khash, and Rask. She said that the message of Zahedan is the message of all Iranians who have vowed to topple the regime and establish people’s rule. They warn Khamenei that this is the last message, should you execute, an uprising will be on its way, Mrs. Rajavi said.