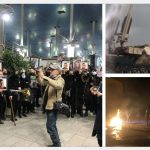 Written by Amineh Qaraee on January 11, 2023. Posted in NEWS 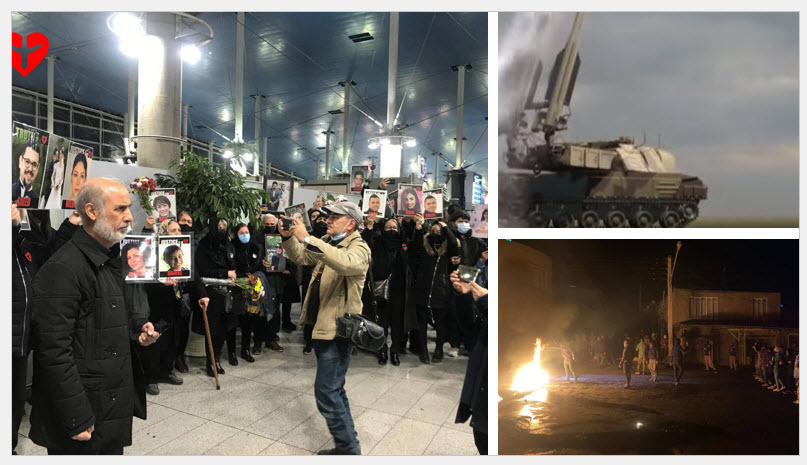 People took to the streets in large numbers across Iran on Sunday, with rallies lasting into the night in cities across the country.

The Iranian people have been remembering the 176 innocent people who died three years ago when the Revolutionary Guards (IRGC) shot down Ukraine International Airlines Flight PS752. Courageous protesters have also condemned the mullahs’ regime for the Saturday executions of Mohammad Hossein Karami and Seyed Mohammad Moradi.

Protests in Iran have now spread to at least 282 cities. According to sources from the Iranian opposition People’s Mojahedin of Iran (PMOI/MEK), the regime’s forces have killed over 750 people and arrested over 30,000.

According to social media reports, regime authorities moved Mohammad Ghobadlou and Mohammad Broghani to solitary confinement in Karaj’s Gohardasht (Rajaie-Shahr) Prison on Sunday night local time in preparation for their execution on Monday morning. Ghobadlou and Broghani were sentenced to death after being tortured into coerced confessions and without due process under regime laws.

Parents and others gathered outside Gohardasht Prison in Karaj, a major city west of Tehran, to protest and prevent the two young men from being executed by the mullahs’ regime. In their rally, the protesters began chanting anti-regime slogans such as “I will kill those who killed my brother!”

On Monday, people gathered in the town of Eshtehard in Alborz Province, west of Tehran, to remember Mohammad Mehdi Karami and Seyed Mohammad Hosseini, who was executed on Saturday by the mullahs’ regime for participating in recent protests.

Locals in the northwest Iranian city of Bukan gathered on the same day to commemorate the 40th anniversary of Avat Ghaderpour’s murder by regime security forces during the recent protests.

On Sunday, merchants and storeowners in Sanandaj, Saqqez, Bukan, Kermanshah, Kamyaran, and Abdanan went on strike to commemorate the third anniversary of the downing of the flight PS752.

Brave women were seen taking to the streets in Najafabad, Isfahan Province, central Iran, to launch anti-regime rallies. According to reports, protesters in the Ilam Province cities of Qom and Darreh Shahr have recently used Molotov cocktails in more attacks targeting regime-associated sites.

People gathered at the local Shahnaz Cemetery in Saqqez, Mahsa Amini’s hometown, to remember the victims of Flight PS752. Protests were also held in various districts throughout Tehran, including Shariati and Sattarkhan. Similar protest gatherings were reported in Isfahan, central Iran, and Sanandaj, western Iran.

When the mullahs have an open hand in the execution of the Iranian people’s children, they will consequently step up their threats against the Middle East and the world.#StopExecutionsInIran https://t.co/Kig1vW8r6y pic.twitter.com/0zAW1Y0ZYb

Iranian opposition President-elect Maryam Rajavi of the National Council of Resistance of Iran (NCRI) has previously stated that the international community must take effective and practical measures against the regime’s killing sprees, torture, and executions.

“When the mullahs have an open hand in the execution of the Iranian people’s children, they will consequently step up their threats against the Middle East and the world,” she underscored.