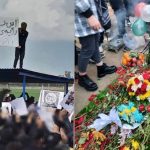 Written by Mohsen Aboutalebi on January 6, 2023. Posted in NEWS 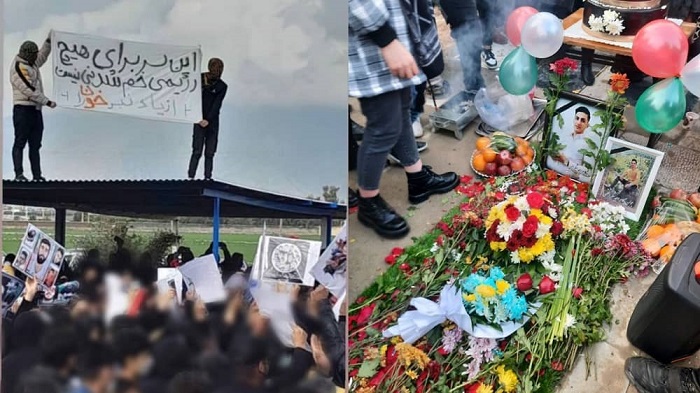 On Thursday, January 5, the 112th day of the nationwide uprising, the people of Mahabad held the ceremony for the 40th day of the martyrdom of Showresh Niknam and chanted “Martyr never dies.”

Large crowds attended the memorial ceremony of Mohsen Qeysari in Ilam and Mohammad Shariati in Sanandaj. In Yazd, people paid homage to Mehdi Zare Ashkezari, who had died because of torture, and chanted “Freedom, freedom.”

The 40th-day ceremony of martyr Hamed Salahshour was attended by a large number of people chanting “This year, is a year of sacrifice, Seyyed Ali (Khamenei) will be overthrown,” “Hamed and Mahmoud have been killed by the IRGC,” and “Basij and IRGC are the same as ISIS” which turned into a passionate demonstration against the regime in Izeh. Hamed Salahshour, 22, was arrested in a demonstration in Izeh and subsequently killed under torture.

On Thursday morning, the families of female prisoners who are on a hunger strike in Kachoui (Fardis) prison, gathered outside the prison. Kachoui Prison is one of the hundreds of prisons and torture centers of the regime, where prisoners are deprived of basic living and medical facilities. A number of women who were arrested during the uprising have started a hunger strike since January 2nd protesting against their long-term detention in limbo, false accusations, heavy punishments, and deprivation of medical care.

On Wednesday evening, January 4, despite cold weather and snow in Saqqez, people gathered in the city park and chanted “Death to the dictator.”