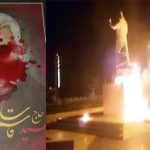 Written by Esmail Mohades on January 5, 2023. Posted in NEWS 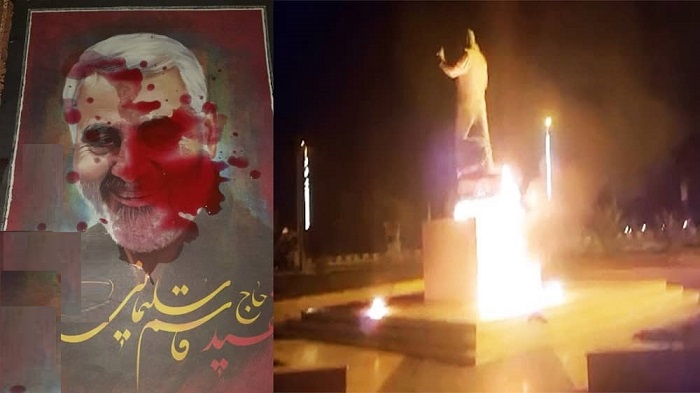 Nightly demonstrations and burning of the statue, banners, and billboards of Qassem Soleimani in various locations.

On Tuesday, January 3, the 110th day of the uprising, on the occasion of the third anniversary of the killing of Qassem Soleimani, rebellion youths in different parts of Tehran, including Jordan Street, Nawab Highway, Sattari and Bani Hashem Highways, as well as in Tabriz, Ardabil, Kermanshah, Mashhad, Maragheh, Yazd, Kerman, and Rafsanjan burned banners and billboards of Ali Khamenei and Qassem Soleimani, and in Tuiserkan, they burned the statue of this criminal.

They also attacked the regime’s propaganda council in Sanandaj and the Friday prayer Imam’s house in the city of Kalemeh Bushehr with Molotov cocktails. They projected the slogan “Death to Khamenei” on the wall of the regime’s cultural complex in Valiasr, Tehran. People in different areas of Tehran such as Narmak, Saadat Abad, Amaniyeh, Tehranpars, and Punak chanted nightly slogans, “Death to Khamenei” and “Death to the dictator” from buildings and roofs on Tuesday evening.

According to the Tasnim news agency affiliated with the Quds Force, on January 3, Qassem Fathullahi, an IRGC member from Tehran’s Mohammad Rasulullah Corps, and the commander of Tharullah Basij base of Sajjad mosque in the Mokhtari neighborhood was killed.

The residents of Fuman (Northern Iran) held the ceremony for the 40th day of Mehran Tawana’s martyrdom on Tuesday morning and chanted, “This perished flower, dedicated to the homeland.” In Samirom, in fear of the people’s uprising, the regime deployed a large number of repressive forces, including hundreds of ununiformed mercenaries, who arrested a large number of young people.

Sepideh Qalandari, a Kurdish girl who was arrested in Tehran protests in November, was martyred under torture by regime executioners. The regime handed over her body to her family on Sunday, January 1, on the condition that her family remains silent. She was buried in Mahabad on Monday morning.

According to Mehr state news agency, on January 2, the regime’s judiciary announced yesterday that the death sentence of Mohammad Beroghani, a 19-year-old youth who was arrested during Tehran protests, was confirmed by the mullahs’ Supreme Court.