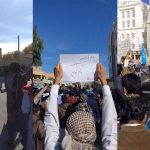 Written by Esmail Mohades on January 2, 2023. Posted in NEWS 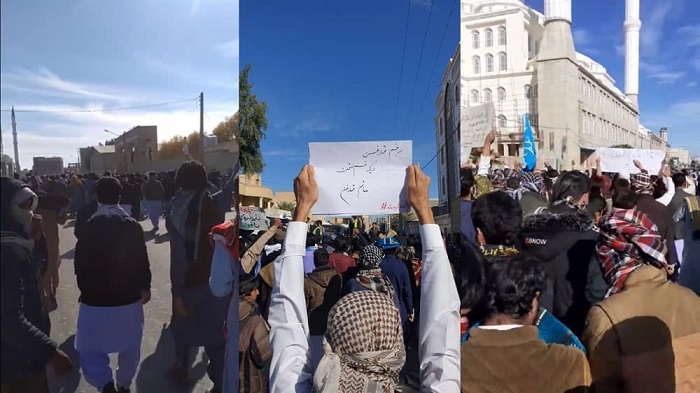 On Friday, December 30, the 106th day of the uprising, widespread protests erupted in various cities of Sistan and Baluchistan province including Zahedan, Rask, and Khash. People went to the streets after Friday prayers and chanted slogans against Khamenei, the IRGC, and the Basij paramilitary force.

In Zahedan, thousands of people chanted slogans such as “Death to Khamenei,” “Death to the dictator,” “IRGC commits crimes with Khamenei’s support,” “This year is the year of sacrifice, Seyyed Ali (Khamenei) will be overthrown,” “I will kill whoever killed my brother,” “Shame on Khamenei, let go of the country.” Demonstrators set Khamenei’s pictures on fire and trampled them. Demonstrators were holding placards that read “Never surrender, No to sorrow, No to grief” and “We pledge to the blood of children – this is going to end.” Brave women of Zahdan participated in the demonstrations with slogans such as “Political prisoners must be released.”

December 30 – Zahedan, southeast #Iran
More footage of the massive number of locals continuing the nationwide protests against the regime on the 106th day of the uprising.#IranRevolution2022#زاهدان pic.twitter.com/gLCXhNYdWq

In the cities of Rusk and Khash, despite the large presence of suppressive forces, people went to the streets after Friday prayers and chanted similar slogans against Khamenei and the IRGC.

Demonstrators were shouting “We don’t want an ISIS governor.” This was in response to the appointment of Mohammad Karami, a Revolutionary Guard, as the new governor of Sistan and Baluchistan. Previously, Karami was the Commander of the Quds Force base of IRGC Ground Force in the southeast of the country and a member of the Security Council of Sistan and Baluchistan Province, who had played an important role in the killing of people in this region.

At 1:00 a.m. on Friday morning, the military forces and plainclothes agents in Galikesh of Golestan province fired bullets outside the Jame Sunnite Mosque and the home of the Sunnite Friday prayer Imam, but they had to flee away when people gathered in the area. On Friday, the people of Galikesh staged a large demonstration in protest against the repressive measures against the Sunni population. At dawn on Friday, youths set fire to the building of the Mullahs’ Propaganda Organization in Gorgan.

Mrs. Maryam Rajavi, the President-elect of the National Council of Resistance of Iran (NCRI), hailed the people of Sistan and Baluchistan province in Zahedan, Khash, and Rask and said that by shouting “Death to Khamenei” and “Death to IRGC” and burning the pictures of the regime’s bloodthirsty and child-killer Supreme Leader, they showed that Iranians from any ethnicity and religion are determined to overthrow the clerical regime and establish freedom and people’s sovereignty. This is a revolution until victory.

May governments and international institutions respond without delay to the desire of the people of Iran who are enduring suppression, torture, and execution.#IranRevolutionhttps://t.co/KNYt2gR1O6pic.twitter.com/V1RIZdujj0