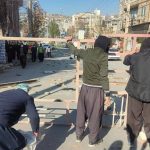 Written by Mohsen Aboutalebi on January 1, 2023. Posted in NEWS 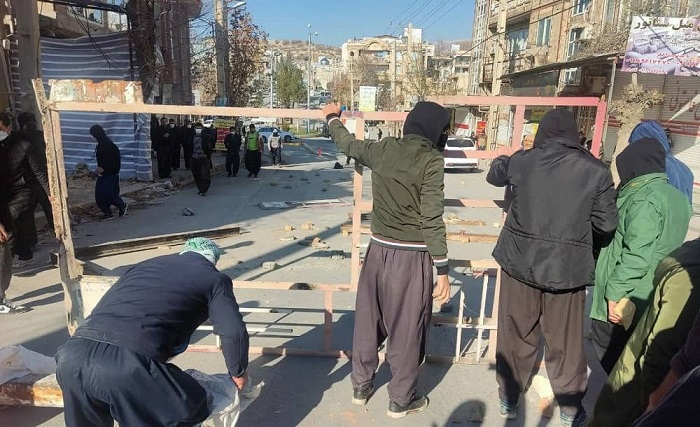 In Javanrud, people went to Haj Ebrahim Cemetery to hold the 40th-day ceremony of the martyrdom of seven martyrs. The regime, which had dispatched reinforcements from Kermanshah to Javanrud in order to prevent the gathering of people, closed the roads leading to the cemetery and prevented people from reaching the cemetery.

On Saturday, January 10, the 107th day of the nationwide uprising, in Tehran, people chanted “Death to the dictator” and “Death to Khamenei” at the entrance to the Grand Bazaar. Suppressive forces confronted the protesters with tear gas and arrested a number of shopkeepers. While shouting “Shame on you! Shame on you!” people got engaged in hit-and-run clashes and chanted slogans such as “This year, is a year of sacrifice, Seyyed Ali (Khamenei) will be overthrown” and “Poverty, corruption, high prices  onward to overthrow.”

The clashes spread to 15 Khordad Square and the surrounding areas of the bazaar, and parts of the Tehran Bazaar, including shoemakers, goldsmiths, household appliances, and tools shut down in protest. Suppressive forces were also stationed in Tehran’s Vali-e Asr Square in fear of demonstrations.

December 31 – Javanrud, western #Iran
Locals took the mullahs' regime flag today while continuing the nationwide protests against the regime on the 107th day of the uprising.#IranRevolution2022#مرگ_بر_ستمگر_چه_شاه_باشه_چه_رهبر pic.twitter.com/vqtyvpL07m

People protested but they were attacked by suppressive forces using tear gas and live ammunition. A number of people were injured and taken to the hospital. The angry people set fire to the State Security Force trailer in the cemetery and marched towards the city chanting “Death to the dictator,” “Death to Khamenei,” “Basij, IRGC are the same as ISIS” and “Death to the IRGC.” Confronting the brutal attack of the suppressive forces, the youth barricaded the streets and lit fires, and chanted slogans such as “Kurds and Baluch are brothers, they hate the leader (Khamenei) to death” and “Zahedan, Kurdistan – my life for Iran.”

December 31 – Javanrud, western #Iran
Footage of the large number of locals at the funeral of Borhan Eliasi, 22, killed today by the regime's security forces.#IranRevolution2022#جوانرود pic.twitter.com/jhnycFpInM

A 22-year-old youth named Borhan Elyasi was killed when the suppressive forces opened fire on the protesters. Angry people gathered outside the martyr’s house to prevent the regime’s agents from kidnapping his body and subsequently took his body to the cemetery and buried him.

In Semirom, people protested outside the Governor’s office chanting “Death to Khamenei,” “We don’t want an ISIS governor,” “As long as mullahs are not gone, our homeland will not be free” and “Don’t be afraid, we are all together” and clashed with the suppressive forces.

In Najaf Abad, people protested while chanting “Our dollars are spent in Lebanon while our youths are sent to jail,” “Poverty, corruption, high prices, onward to overthrow” and “As long as mullahs are not gone, our homeland will not be free.”

December 31 – Javanrud, western #Iran
More footage of the large number of locals at the funeral of Borhan Eliasi, 22, killed today by the regime's security forces.#IranRevolution2022#جوانرود pic.twitter.com/rFsDT7PvGY

On Saturday morning, young people set fire to the Basij base in Anzali by throwing Molotov cocktails.

Mrs. Maryam Rajavi, the President-elect of the National Council of Resistance of Iran (NCRI), said that Khamenei, who is even scared of martyrs and their memorial ceremonies, opened fire on the people in Javanrud who had gathered to pay homage to seven martyrs on their 40th day of martyrdom killing Borhan Elyasi, another brave young man from this land. These crimes only fuel the flames of the uprising.