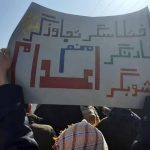 Written by Amineh Qaraee on December 24, 2022. Posted in NEWS 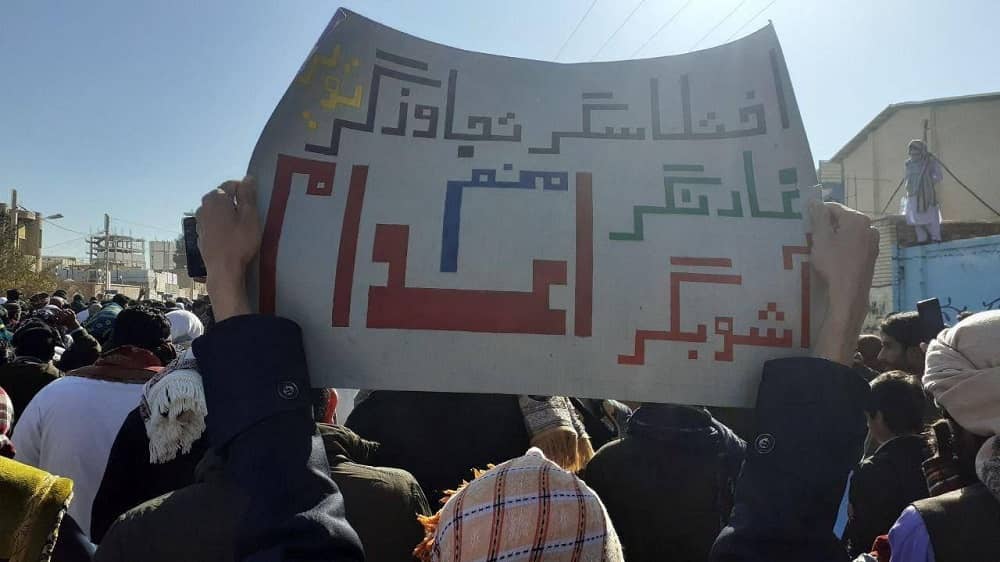 On Friday, December 23rd, the 99th day of the uprising, thousands of Zahedan (southeastern Iran) residents marched on the streets after Friday prayer and chanted slogans such as “Death to Khamenei,” “Bloodthirsty Khamenei, we will bury you,”

“Death to Basiji and IRGC,” “This year, is a year of sacrifice, Seyyed Ali (Khamenei) will be overthrown,” “Poverty, corruption, high prices, we will march to overthrow,” “Basij, IRGC, you are same as ISIS,” “This is the final message; there will be a revolt if you execute,” “Death to tyrannical rule,” “Basiji, scoundrel,” “Freedom, freedom, freedom,” and “We pledge to the blood of our comrades  we will stand until the end.” The brave women of Zahedan participated in this large demonstration chanting “My dear brother, I will take your revenge.” Demonstrators kicked Khamenei’s name written on the asphalt.

Demonstrators addressed the plainclothes agent by chanting “dishonorable IRGC agent, don’t wear Baluchi costume.” The youths in Zahedan were holding placards that read, “Death to the worst dictator in history,” “Never surrender,” “Die in honor, never live in shame,” “You represent corruption on earth, I am the light of hope,” “You are the embezzler, looter, rioter, rapist, but I am condemned to death instead,” “Baluch, Kurd, Turk, Lor, Fars, Bakhtiari, Azeri (minorities)- Unite, unite” and “We will never surrender, we either win or will be martyred.”

December 23 – Zahedan, southeast #Iran
Protesters chanting: "I will kill those who killed my brother!"#IranRevolution2022#زاهدان pic.twitter.com/wcNJ08Nd12

In Rask, courageous youths demonstrated in the streets despite the large presence of suppressive forces and protested the kidnapping of the city’s Friday prayer Imam by the regime’s agents. Demonstrators in Zahedan also carried placards demanding his release.

Arak residents paid respect to Mehrshad Shahidi and laid flowers on his grave. In Sanandaj, the ceremony of the 40th day of the martyrdom of Issa Bigleri was held with people chanting, “Martyr never dies”. In Shiraz, people paid respect to Omid Zare Moayedi on his 40th day of the martyrdom ceremony. His mother, pointing at the suppressive forces, shouted, “Come and get me.” She called on people: “Be brave; don’t let my child’s blood be wasted.” The ceremony of the 40th day of martyrdom of Habibullah Fathi was held in Divandareh.

December 23 – Zahedan, southeast #Iran
Protesters chanting:
Khamenei is a tyrant; we'll bury him!
Death to [Khamenei] for all these years of crime!
Political prisoners must be freed!
Death to Khamenei!
IRGC & Basij are our ISIS!#IranRevolution2022#زاهدانpic.twitter.com/eUqhVMb0Fl

In memory of the martyrs of Izeh (Khuzestan province), defiant youths set fire to Basij and IRGC bases in Qom, Qahdarijan of Isfahan, Kerman, Shush, Dorud and Damavand, and burned down the pictures of Khamenei and Qassem Soleimani in Zahedan, Bandar Abbas, Rafsanjan, Tuyserkan, and Meshkinshahr. They also set fire to a state banner in Tehran’s Olympic Square, equipment of the regime’s TV station in Shapur Abad in Lorestan province, and billboards of the Ministry of Intelligence and IRGC Intelligence in Ramsar, Khoi, and Talesh.