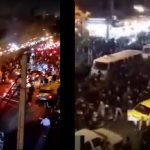 Written by Amineh Qaraee on December 20, 2022. Posted in NEWS 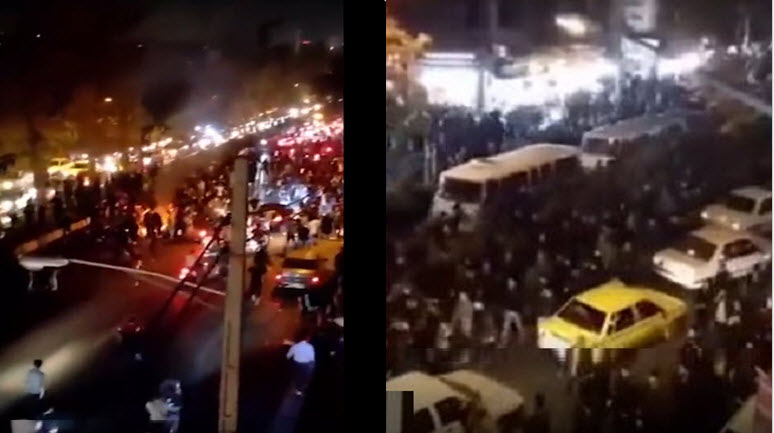 On Sunday evening, Tehran residents in South Shahin, Darband, Sattar Khan, Darvazeh Dowlat metro, and some other areas held nightly protests and chanted, “Death to Khamenei,” “Death to the Dictator” and “Death to IRGC.”

On Monday, December 19, the 95th day of the uprising, in Tehran, a group of young people marched on Enghelab Street chanting “Poverty, corruption, high prices, we will march to overthrow” and “For every fallen person, one thousand rises.” This was despite the large presence of suppressive forces and plainclothes agents.

Bazaar merchants went on strike in the cities of Kerman, Rasht, Sanandaj, Ilam, Saqqez, Baneh, Kamyaran, Ravansar, etc. They went on strike despite the fact that the suppressive organs severely repressed and pressured the shopkeepers who participated in the previous strikes. Among repressive measures, a number of merchants were arrested, many shops were sealed or their bank cards were canceled.

In Tehran, residents of Rasul Akram Hospital and students at Iran University of Medical Sciences, and in Qeshm, the employees of the oil terminal went on strike and staged protests. A number of artists staged a protest rally outside the Evin prison for the second day running.

Defiant youths in Golpaygan, central Iran, attacked a Basij base and in Saqqez and Takab the houses of two regime agents with Molotov cocktails and set them on fire. The state-run news agency IRNA reported this morning that four IRGC agents were killed in a clash with youths in Saravan.

December 19 – Kerman, south-central #Iran
Locals are on strike and continuing the nationwide protests against the regime on the 95th day of the uprising.#IranRevolution2022#اعتصابات_سراسری pic.twitter.com/sJcGYRqFOx

The funeral ceremony of Muhammad Haji Rasulpour was held in “Eli Kand” village near Bukan with a large crowd chanting “Martyr never dies.” In Mahabad, a large crowd attended Faiq Mam Qaderi’s 40th day of martyrdom and sang the hymn “O Martyr” in his honor.

The state-run news agency ISNA reported today that during the meeting of the Supreme Judiciary Council, Gholam Hossein Mohseni-Eje’i, the Judiciary chief, called for “… expedition in the implementation of the sentences issued and determined in any area, including cases of riots and so on.”

December 19 – Rasht, northern #Iran
More footage of the large number of locals continuing the nationwide protests against the regime on the 95th night of the uprising.#IranRevolution2022#مرگ_بر_ستمگر_چه_شاه_باشه_چه_رهبر pic.twitter.com/LDYCo4cuD5