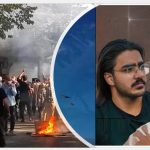 Written by Esmail Mohades on December 14, 2022. Posted in NEWS 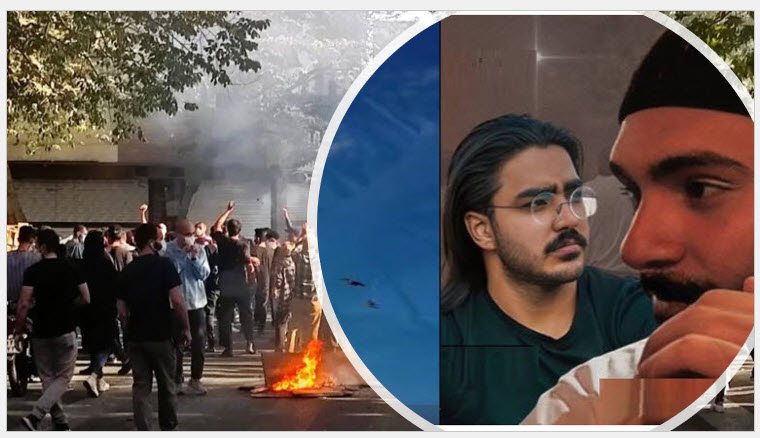 Students in Tehran Azad University of Science and Research, Sourah University of Tehran, and Al-Zahra University of Mashhad staged protests against the execution of Mohsen Shekari and Majidreza Rahnavard chanting “My martyred brother, I will take your revenge” and “They took away Majidreza and returned his corpse.”

On Tuesday, December 13, the 89th day of the uprising, suppressive forces widely attempted to prevent demonstrations against the execution of Majidreza Rahnavard in Mashhad. They closed the entrances to the mosque where the martyr’s memorial service was planned to be held. People gathered outside the mosque showed their anger by shouting “Shame on you, shame on you” and chanting “If we don’t stand together, we will be killed one by one.” On Monday evening, suppressive agents stormed the house of Majidreza’s grandmother, where a memorial ceremony was held, and arrested some of his relatives.

Youths in Salehabad of Saqqez, and schoolgirls in Kamyaran staged demonstrations chanting “Khamenei is a murderer, his rule is null and void.” A nightly demonstration was held in Ahvaz with the slogan “You are lewd, I am a liberated woman.” Defiant youths attacked Basij bases in Shiraz and Yazd with Molotov cocktails.

On Tuesday morning, Abbas Mansouri’s funeral in Shush Daniyal was attended by a large crowd. Abbas, 18, was arrested and tortured on November 16 and died suspiciously a few days after his release. His family has been to declare the cause of death as suicide. He is the fourth youth known to have died in this way after his release. Meanwhile, Habibollah Yaqoubi, who was shot and wounded by the suppressive guards on Bloody Friday in Zahedan, died on Monday, December 12.

On Tuesday evenings, nightly demonstrations were held in different parts of Tehran. In Zibashahr, Saadat Abad, and Sharif Industrial University, protesters chanted “Death to Khamenei,” “Death to the dictator” and “Death to the child-killer rulers” and in the Tehran subway protesters were chanting “We pledge to our fallen comrades, we will stand steadfast to the end”. In Tehran Pars, people held nightly protests chanting “Your hands stained with blood, shame on you, shame on you.”

According to the state-run website Entekhab on Tuesday, December 13, Mohseni Eje’i, the regime’s Judiciary chief, issued orders, instructing the judges “about the speed [of examining the cases] and dealing with the cases of individuals who are one way or the other related to terrorist groups, foreign services, and hostile movements… and said, giving concessions to those who have caused insecurity for the citizens and played an effective role in the unrest, is an injustice to the people;

Therefore, there should be no concession to such convicts.” Breaking News service of the regime, December 13, quoted Ali al-Qasi, Chief Justice in Tehran Province, as saying: “400 rioters have been sentenced to prison terms in Tehran.”

Fars news agency affiliated with the IRGC, December 13, quoted Esmaeil Khatib, Minister of Intelligence of the regime, warning: “Anyone who had a role in the riots will be punished wherever they are in the world.”