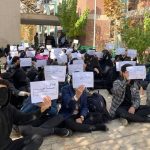 Written by Amineh Qaraee on November 28, 2022. Posted in NEWS 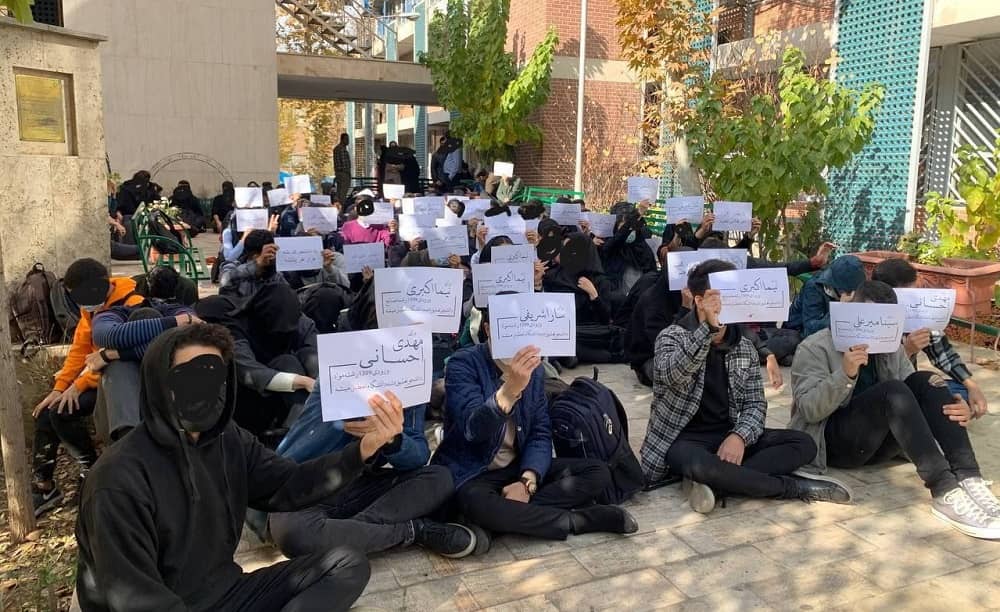 Allameh’s students were chanting, “The club-wielder guards should go to hell.” A group of schoolgirls in Sanandaj organized a memorial ceremony honoring the martyrs of the uprising. The families of the prisoners gathered outside the Evin prison in Tehran. On Sunday morning, November 27, defiant youth converged on Habibollahi Street in Tarasht, Tehran, and chanted, “Death to the dictator.” Youths in Tehran’s  Qal’eh Hassan Khan and in Karaj set fire to Basij bases.

Truck drivers went on strike in Kermanshah, Bandar Abbas, Marand, Qazvin, Isfahan, Shahinshahr, Kashan, Juneqan, Yazdanshahr, and Farrokhshahr. The workers of Morrattab Automobile Company continued their strike for the second day running. Hossein Salami, Commander-in-Chief of the IRGC, traveled to Zahedan, Sistan, and Baluchistan provinces, to boost the morale of the Basij forces.

At a meeting with Basij members, he unveiled the regime’s fear of the nationwide uprising by saying: “Today, the country is facing a colossal world war. The aim of the political formation of forces of blasphemy, polytheism, hypocrisy (a derogatory term used for the PMOI/MEK), and atheism in the world is to capture the hearts and minds of the youth of this country.

Unfortunately, some people in the country have joined them, having the same illusions. Today is the time to make a decision, and one can’t stand in the middle.”According to the state-run News Agency, Mehr, on November 27, Jalal Mahmoodzadeh, a member of the regime’s parliament from Mahabad, said in a public session today: “According to statistics, 13 people have died in Mahabad, and according to unofficial statistics, 105 people have lost their lives in Kurdistan cities as well. We called on the Minister of Interior to identify the perpetrators who fired live bullets at people and hand them over to the court. But, with utter surprise, they filed a complaint before the judicial system against me, who is pursuing this matter.

What are the reasons for dispatching forces in mass and enforcing tight security measures in Kurdish cities, including Mahabad, arbitrary arrests, the nightly raids on houses and the destruction of people’s equipment and cars, terrorizing and setting up numerous checkpoints at the entrances of Kurdish cities and checking their private belongings?”

November 27 – Abdanan, western #Iran
Locals continuing the nationwide protests against the regime on the 73rd night of the uprising.#IranRevolution2022#مرگ_بر_ستمگر_چه_شاه_باشه_چه_رهبر pic.twitter.com/z544cuNExf

The state-run newspaper Hamdeli, November 27, reported that on Saturday, November 26, Ebrahim Raisi, the regime’s president, visited one of the Special Units of the IRGC, named “Fatehin Unit,” which “has played an important role in recent weeks” in suppressing the people of Tehran.

In describing this group, the newspaper quoted the group’s leader as saying: “In the uprising of 2009, our forces did an excellent job and were one of the most well-known units in Tehran. We were the first Basij Force to enter Syria and were honored to be the Haram (holly shrine in Syria) defenders. Many successful and highly effective operations were carried out there, which was also welcomed by the IRGC Quds Force.”