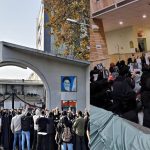 Written by Amineh Qaraee on November 16, 2022. Posted in NEWS 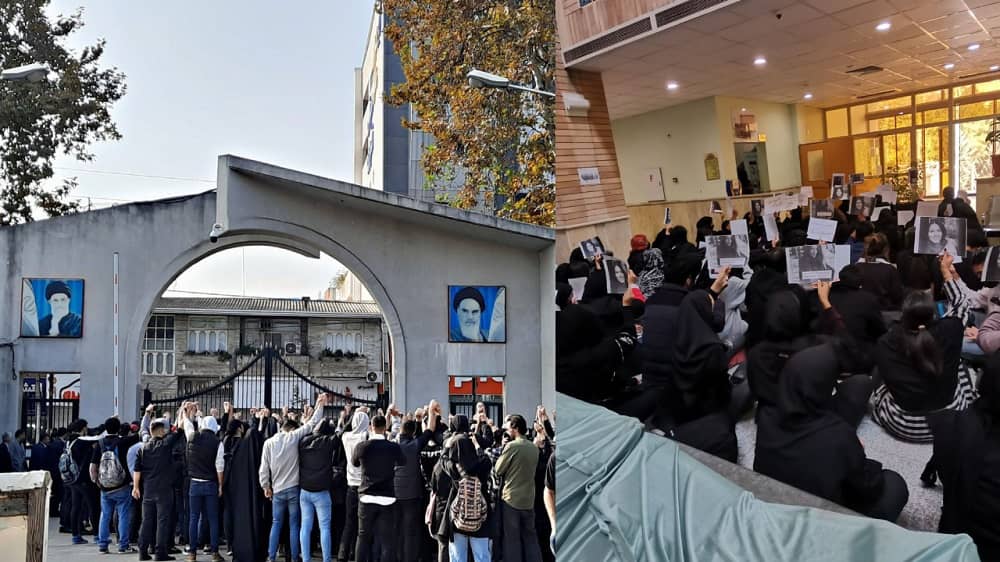 In Arak, central Iran, people took to the streets, chanting, “Mullahs must get lost.” In Karaj, the slogan “Khamenei is a murderer, his rule is illegitimate,” could be heard.

Monday night, November 14, on the 60th day of the nationwide uprising, different areas of Tehran, including Tehran Pars, Ekbatan, Shahre-ziba, College Square, Valiasr Metro, Saadat-Abad, Janat-Abad, Shahin South, Punak and Ferdous and many cities of the country such as Arak, Karaj, Rasht, Sanandaj, Shiraz, Bandar Abbas, Tonkabon, and Mirjaveh were scenes of night protests. Protesters chanted, “Death to Khamenei,” and “Death to the dictator.” In many areas of Tehran, such as Saadat-Abad and College Square, defiant youths pushed back the suppressive forces’ attack and blocked the road by setting a fire.

On Monday, November 14, protests, and strikes continued in universities and schools despite the restrictive measures enforced by the suppressive forces. Students at various universities, including Sharif Industrial University, Tabriz, and Qazvin, staged their sit-ins and protests by chanting, “In the bright month of Aban, dictatorship will be overthrown.” [Aban is the current Iranian month].

November 15 – Tehran, #Iran
Locals are establishing roadblocks, taking control of their streets, and continuing the nationwide protests against the regime on the 61st day of the uprising.#IranRevolution2022#مرگ_بر_ستمگر_چه_شاه_باشه_چه_رهبر pic.twitter.com/wW8JKpnCsj

Students in Golshahr township of Karaj, Isfahan, and Rasht protested, chanting “This year is the year of sacrifice; Seyed Ali (Khamenei) will be overthrown”. Youths in Bandar Abbas, southern coast of Iran, targeted the Basij base with Molotov cocktails. In Tonkabon, northern Iran, the large images of Qassem Soleimani, former commander of the terrorist Quds force, were destroyed. In Shahrood, the protesters destroyed a big banner of Khamenei’s image. The crowd in Sanandaj turned the memorial ceremony on the 40th day of Matin Nasri’s martyrdom into an anti-government protest.

On November 13, 2022, the state-run Etemad online reported that the Judiciary of the regime issued a death sentence for one of the arrestees of the uprising in Tehran, adding: “The person who had set fire to a government building, was sentenced to death on the charges of being Mohareb (waging war against God on earth), disturbing public order and tranquility, and for converging and conspiring to commit crimes against national security.

Mrs. Maryam Rajavi, President-elect of the National Council of Resistance of Iran (NCRI) said these criminal verdicts reflect the ultimate brutality and cruelty of the regime on the one hand and its fear of the continued uprising on the other hand. Of course, the rebellious youths will respond to it in the most decisive manner. She called on the United Nations Secretary-General, the Security Council, the European Union, and all human rights advocates to take immediate action to secure the release of the prisoners and prevent their execution.