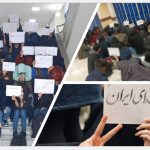 Written by Amineh Qaraee on November 14, 2022. Posted in NEWS 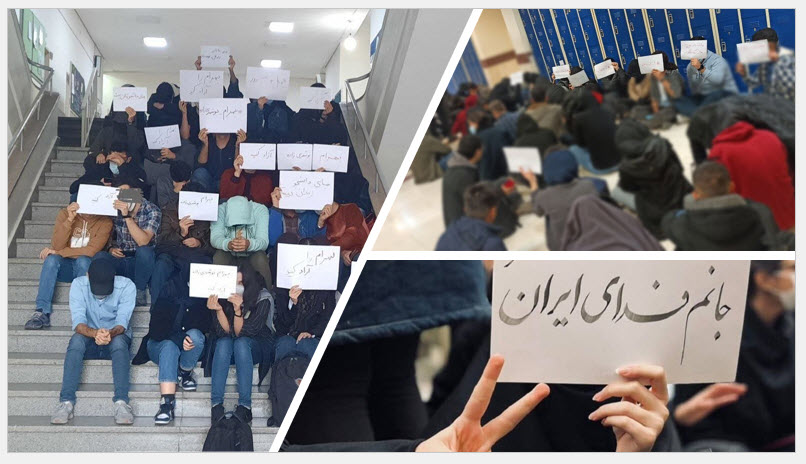 Gatherings, Sit-ins, and Protests by University and High School Students.

In Urmia, Azad University students also staged protests and strike. In Karaj, brave students protested while chanting, “Freedom, freedom, freedom.” Locals chanted in the metro station of Tehran theater, “Death to the dictator, death to IRGC, and death to Khamenei.” In Tabriz, rebellious youths set fire to Basij District 5 base on Cento Road with Molotov cocktails. In Shiraz, youths set fire to government statues and symbols.

On Saturday night, the slogans “Death to Khamenei” and “Death to the dictator” echoed from the buildings in Narmak and Kaveh Boulevard in Tehran and Arak. In Mehrshahr in Karaj, people protested at night, chanting, “Khamenei, the Zahhak! We will bury you!” and “IRGC and Basij, you are our ISIS.” Rebellious youth set fire to a Basij base in Piranshahr and a large poster of Khamenei in Astara.

In Bivaran in, Sardasht commemorated Heiman Hamzeh, who was killed by the regime’s agents, chanting, “Even if a single Kurd is left, he or she will take revenge for Heiman’s blood.” In Sardasht, people protested outside Heiman’s house, chanting, “The martyr does not die.”

Referring to the slogans of “Death to Khamenei” and “Death to the principle of Velayat Faqih,” the regime’s state-run TV quoted Mehdi Rabbani, Friday prayer Imam in Mahallat, on November 12 as saying: “The MEK was planning, in addition to all their plans, to accuse and slander the Supreme Leader. This is the same group of Monafeqin… They slandered the Supreme Leader, they slandered the clergy, and they are still doing it, and they are still continuing it.”

November 13 – Tehran, #Iran
Students of Soore University are protesting the regime's crackdown measures and continuing the nationwide protests against the regime on the 59th day of the uprising.#IranRevolution2022#مرگ_بر_ستمگر_چه_شاه_باشه_چه_رهبرpic.twitter.com/mkV98Rcfn9