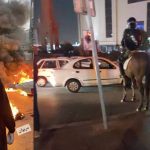 Written by Amineh Qaraee on November 8, 2022. Posted in NEWS 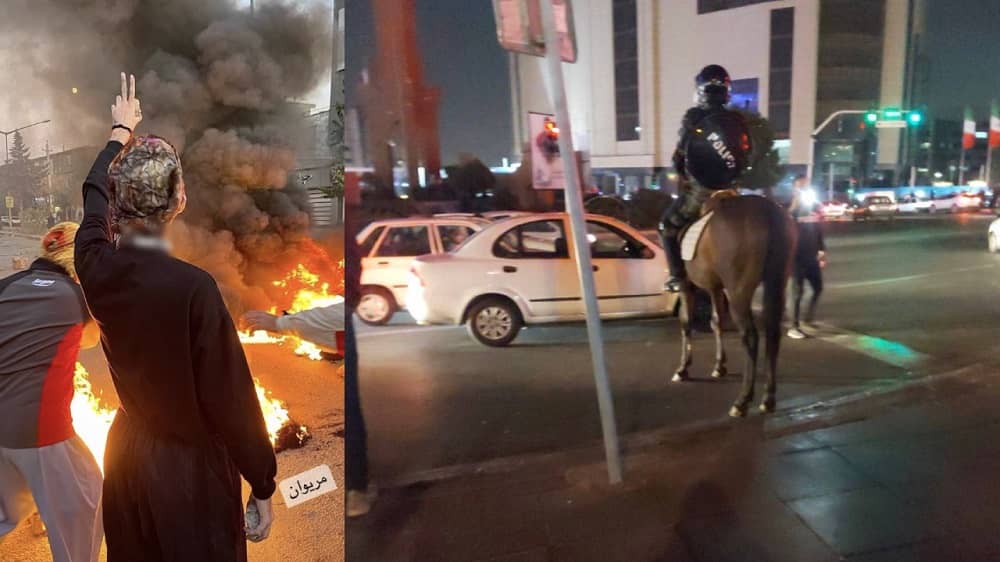 In Tehranpars, Sadeghieh, Sattar Khan, Narmak, and Naziabad districts, youths clashed with suppressive agents, and in Naziabad they made the agents flee.

In Tehran, people demonstrated in Naziabad, Moniriyeh, Tehranpars, Sattarkhan, Sadeghieh, Ferdowsi Street, District 15, Narmak, Haft Hoz Square, Ati Saz Township, Saadat Abad, and other places chanting,  “Death to child-killer rulers,” “Death to the dictator,” “This year, is a year of sacrifice, Seyyed Ali (Khamenei) will be overthrown,” “Mullahs must get lost,” “Zahedan, Kurdistan, Iran’s pioneers,” “This is the final message, the regime itself is the target,” and “Proud Iranians, support! support!”

In Marivan, demonstrations and clashes started in the morning and continued until late at night. Youths demonstrated and lit a fire in the streets while chanting slogans against Ali Khamenei. In some areas, the suppressive forces shot at people and at the windows of houses.

In Mehrshahr of Karaj, people staged a nightly protest chanting, “Khamenei is a murderer; his rule is null and void.” In Chaharbagh of Isfahan, while protesters were chanting “Death to Khamenei,” the agents attacked and fired on them with pellet guns. In Kermanshah, locals held nightly demonstrations in Ferdowsi Square chanting, “Death to the dictator” and “This year is a year of sacrifice; Seyyed Ali (Khamenei) will be overthrown.” In Qom, people staged a nightly demonstration on Nirugah Street.

The regime’s agents opened fire on nightly demonstrators in Sarbaz city in Sistan and Baluchestan Province. Young people in Bushehr blocked the street along the beach and protested by chanting, “Freedom, freedom, freedom.” In Mashhad, youths set fire to state banners.

The widespread arrest of demonstrators, doctors, and medical staff who help the wounded, lawyers, journalists who report protests, and activists who bring the news of the uprising to the public’s attention on social networks, continues. In addition, a large number of youths are kidnapped daily by suppressive forces in various cities, especially in Kurdistan and Sistan, and Baluchestan provinces.