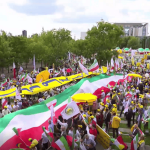 Thousands Participate in “On the March to Freedom” Rally in Berlin, in Solidarity with the Iranian Resistance and Uprisings in Iran

This year, supporters of the Iranian Resistance called on the international community to view the regime in Tehran for what it is and join their struggle to combat the religious fascism that has brought extremism and devastation to the Middle East and insecurity to other parts of the world.

On July 23, holding high the banners of the Free Iran World Summit 2022 and pictures of Massoud and Maryam Rajavi, the leaders of the Iranian Resistance, thousands of Iranians gathered in Berlin and expressed their strong determination to carry on and commit to regime change in Iran. Defiant and energized by the Iranian regime’s conspiracies and terrorist plots inside Albania that aimed to silence the voice of the resistance.

Mrs. Maryam Rajavi, the NCRI’s President-elect send a video message to the rally.
“What is the correct and effective policy against the religious fascism ruling Iran and its Gestapo? The correct and effective response to religious fascism is one word, “firmness,” and not kowtowing,”. Mrs. Rajavi said, adding: “The former German intelligence organization chief revealed the Iranian regime had been behind several terrorist operations after the signing of the JCPOA, but the Europeans kept silent because they did not want to jeopardize the Iran nuclear deal.

“So, gentlemen, you missed out on the JCPOA and instead have to deal with the regime’s terrorism while it is getting closer to a nuclear bomb. Truly, for how long do you want to let the monster of terrorism and fundamentalism take you for a ride?

“What kind of a policy is this? Its victims are western nationals in Iran. Of course, the main victims have always been and continue to be the Iranian people and Resistance.”

Several German lawmakers joined the grand rally and addressed the crowd by expressing their support of the National Council of Resistance in Iran and its principal organization with a strong network inside Iran, the Mujahedin-e-Khalq Organization.

Excerpts of the speeches are reflected below:

Eduard Lintner, Parliamentary State Secretary for the Federal Secretary of the Interior (1991-1998)

The Assadi case is not just a Belgian issue because Assadi is on the EU terror list. The Iranian regime threatens to take dual nationals as hostages. The sentence of Assadi was an important signal that the impunity of Iran’s regime is at an end. The question we must ask now is can this bring change to Iran’s behavior? The answer is clearly no. We can’t allow Iran’s regime to take European hostages. We need a strategy change in our policy toward Iran’s regime.

A well-organized movement that can lead Iran to a democratic future exists. It is led by Mrs. Rajavi, the MEK, and the NCRI. They can really bolster our stance when we deal with Iran’s regime.