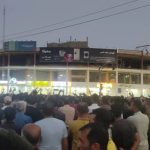 Written by Mohsen Aboutalebi on May 31, 2022. Posted in NEWS 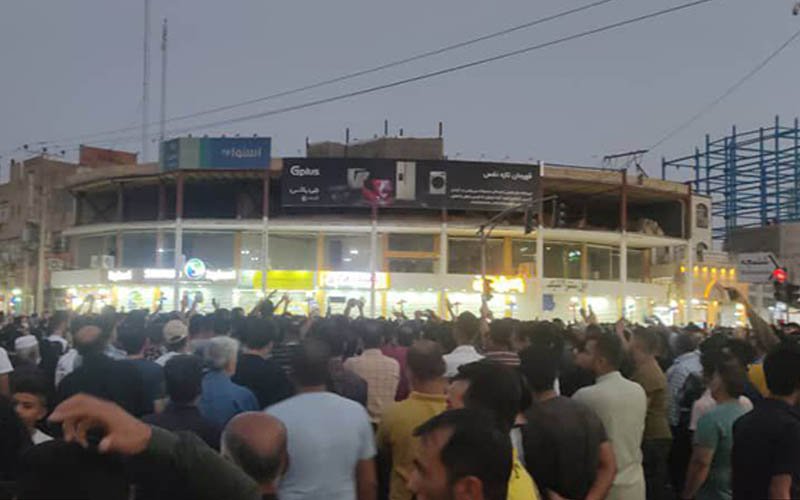 According to state media, 29 people have died, 37 have been injured, and dozens more are still trapped beneath the rubble. Locals, on the other hand, claim that the actual number of casualties is much higher.

Citizens took to the streets in Abadan for the fourth night in a row on Saturday, May 28, to show solidarity with the grieving families of the victims of the collapsed Metropol twin towers and to express their outrage at the regime’s 43 years of misery, crimes, mismanagement, and massacres. According to state media, 29 people have died, 37 have been injured, and dozens more are still trapped beneath the rubble. Locals, on the other hand, claim that the actual number of casualties is much higher.

“There were between 80 and 120 people,” a citizen said. “The official death toll is false because the Khuzestan governor ordered health officials to keep the death toll secret.”

“Death to the dictator,” “[Supreme Leader Ali] Khamenei is a murderer; his rule is invalid,” “The state-run TV is a disgrace,” Despite the regime’s brutal suppression, protesters in Abadan chanted “Khamenei; shame on you, let go of the country” and “Death to the Revolutionary Guards (IRGC) Basij.”

Authorities used tear gas and birdshot against unarmed civilians, and dozens of grieving youths were arrested.

#IranProtests#Khuzestan, SW #Iran—residents in #Abadan take to the streets, mourning for #Metropole victims.

Locals, on the other hand, claim that the regime has halted the rescue mission and that locals are evacuating their loved ones. “There are no rescuers, firefighters, or relief nurses on the scene.” “These are all native citizens,” a resident says.

“Authorities have severely hampered internet access. Security forces also forced stores to close, arresting and transporting their owners to unknown locations,” according to the opposition, the People’s Mojahedin of Iran (PMOI/MEK).

“Despite the regime’s harsh measures, residents in Tehran held a vigil for the people of Abadan and rallied, chanting ‘Death to the dictator!’ in reference to the regime’s Supreme Leader Ali Khamenei.”

#IranProtests
On the third night of protests against #Iran regime's #43YearsOfMisery, Lies, Crimes, Suppression, Massacre, and Mismanagement, citizens take to the streets in various cities.

They chant:
—Death to the dictator
—Our enemy is right here
—The mullahs must get lost pic.twitter.com/ICOqvTPOZk

Authorities have also dispatched and stationed anti-riot forces in various cities, including Tehran, to quell potential protests; however, the regime’s atrocities have prompted more citizens across the country to take to the streets to express their displeasure with the regime’s failures.

The regime’s poor response to the collapse of the Metropol fuelled public outrage. Instead of sending relief forces, the mullahs dispatched several anti-riot forces and armored vehicles during the golden hours. Outraged citizens chanted in Abadan, “Death to this velayat for all these years of crimes!”

“Down with the dictator,” “Basiji must get lost,” “Death to Basiji, the shameless thugs,” “Our enemy is here. They lie, saying it’s America,” “I will kill, whoever killed my brother,” “People of Khuzestan will die, but will not accept humiliation,” “Leave Syria alone, think about us,” and “They colluded with the thieves and killed the nation,” and “We will fight and take back this city” were chanted across the raised-up cities, according to the Iranian opposition coalition National Council of Resistance of Iran (NCRI).

The people of the risen cities were praised by NCRI President-elect Maryam Rajavi. “Through their continuing their protests, the people are conveying the message that Khamenei and his president, Raisi, should be terrified because the Iranian people are all together and no longer intimidated by the regime’s suppression,” she said on May 27.