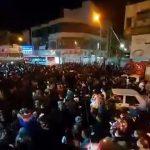 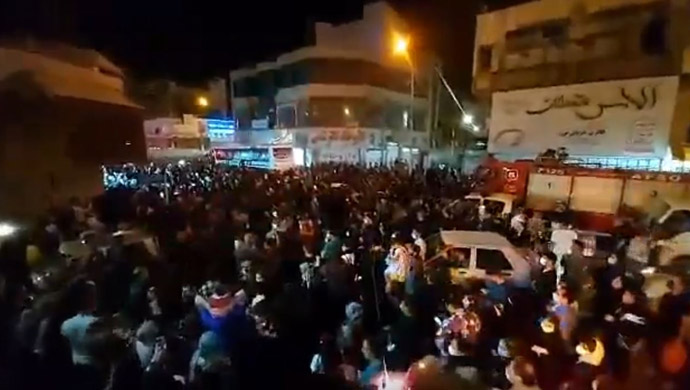 Angry protesters chanted slogans against the regime, local officials, and the corrupt contractor who was responsible for the faulty construction project that resulted in the tower collapsing.

On Wednesday night, May 25, a large crowd of locals in Abadan, southwest Iran, took to the streets in anti-regime protests sparked by the collapse of the city’s Metropol tower on Monday, May 23. Angry protesters chanted slogans against the regime, local officials, and the corrupt contractor who was responsible for the faulty construction project that resulted in the tower collapsing, killing at least 16 people, injuring 37 others, and leaving dozens more missing. According to state media, 34 of the injured have been evacuated and are recuperating at home.

Protesters chanted slogans against the senior regime and local Abadan and Khuzestan province officials on Wednesday night, blaming them for the disaster’s destructive policies and corruption, as well as their recent incompetence in providing necessary aid during the rescue effort.

Locals in Abadan have been furious with officials over the fact that anti-riot units were dispatched to the city immediately after the incident to quell any signs of unrest. The majority of relief efforts have been carried out by volunteers with very little government assistance. The demonstrators also dismissed claims made by Abadan officials and state media about Hossein Abdolbaghi, the corrupt contractor and CEO of the company that built the Metropol tower.

Abdolbaghi is well-known for his ties to the IRGC, Abadan’s mayor, and the regime’s security apparatus. He was able to advance in Abadan’s economy and gain favor with regime officials by working with the IRGC. This provided him with leverage in obtaining exclusive rights to construction tenders and the ability to plunder funds for projects such as the Metropol tower.

“It’s a lie! They chanted, “Abdolbaghi is not dead!” Local officials in Abadan and Khuzestan province claimed Abdolbaghi had been arrested after the tower collapsed. Later, state media reported that Abdolbaghi’s body had been discovered in the rubble, citing other regime officials.

The regime’s prosecutor general, Mohammad Jafar Montazeri, stated that Abdolbaghi was “certainly dead” and that his body was discovered 24 hours after the tower collapsed. Locals in Abadan have become even more suspicious as a result of the regime’s contradictory remarks, especially given the regime’s long history of telling lies.

According to state media, a blurred image of a dead body with a mutilated face was broadcast, claiming to be Abdolbaghi’s body. It also included images of Abdolbaghi’s alleged identification documents as well as cash in his pockets. Family members of Abdolbaghi were also taken to a local morgue before the cameras arrived to identify his body, and they were seen crying.

Locals in Abadan and elsewhere used social media to refute the regime’s claims, claiming that the family members appeared to have been coerced into participating in the show and appeared to be “low-class actors.” Others noted that the items officials claimed to have discovered in Abdolbaghi’s pockets were in excellent condition and that they did not appear to be those that would be recovered from a dead body pulled from the rubble of a ten-story building. Officials from the regime also failed to provide any DNA proof that Abdolbaghi died in the incident.

The representative of Khuzestan province in the Supreme Provincial Council stated that the former mayor of Abadan, who oversaw the inauguration of the Metropol tower, now works for the Abadan Municipality’s Investment Organization, adding to public skepticism of the regime’s claims.

Locals in Abadan say regime officials have dispatched a large number of security forces, and internet access has been severely disrupted in the city.