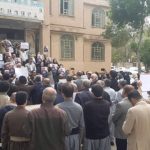 Written by Mohsen Aboutalebi on May 5, 2022. Posted in NEWS 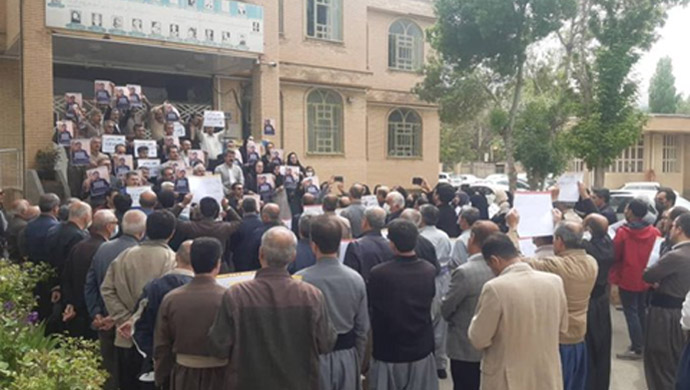 Teachers protested across Iran on May 1st, reiterating their long-standing demands for better wages and working conditions, educational reform, and the release of imprisoned teachers. Protests were reported in Tehran, Shiraz, Tabriz, Isfahan, Rasht, Kermanshah, Khorramabad, Arak, Saqqez, Bushehr, and Ardabil, among other cities. Attendees included both active and retired teachers.

Security forces surrounded and blocked the Majlis (parliament) and its surrounding streets in Tehran to prevent teachers from holding rallies. In one of the nearby parks, the teachers staged a protest.

Teachers are demanding that the government service law, the “Teachers Ranking” bill, be fully implemented and that salaries be adjusted to reflect rising inflation rates and currency depreciation. Teachers are fighting for basic rights like raising their monthly wages above the poverty line, which is currently around 120-140 million rials. The majority of teachers are compensated at half that rate. Teachers’ salaries are 40% lower than the cost of living, according to the regime’s own statistics.

According to their May Day statement, Iranian teachers and workers have been denied basic universal rights such as living wages above the poverty line, health care, social security, and the right to assemble and protest. So far, the regime has either ignored or repressed the teachers’ protests.

In recent months, the regime’s security forces have arrested hundreds of teachers and labour activists. Some have received prison sentences or fines, while others have been summoned to court. To intimidate the public and prevent protests, the regime is employing all means at its disposal. Despite this, teachers have taken to the streets to reiterate their demands. Several rounds of nationwide teacher protests have occurred in the last year, prompting these demonstrations.

The teachers chanted a number of slogans on Sunday, including: “Imprisoned teachers must be released!” “The [Education] Minister is a disgrace!” “Teachers don’t belong in prison!” “Iran is no place for cruelty!”

Heavy security presence can be seen in the cities where rallies are held in videos obtained from the protests. In some cities, security forces have attacked protesters. At least 15 teachers were arrested during Sunday’s protests, according to reports.