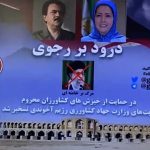 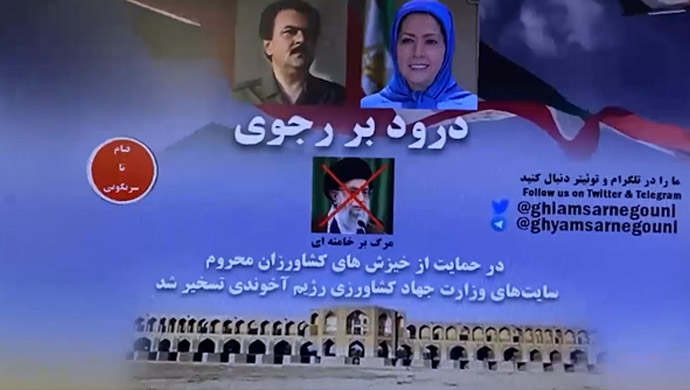 Images of Iranian Resistance leader Massoud Rajavi and Mrs. Maryam Rajavi, President-elect of the Iranian opposition coalition National Council of Resistance of Iran (NCRI), as well as an image of regime Supreme Leader Ali Khamenei with a red X, were posted on these MAJ websites.

On Monday, April 25, the Iranian “Ministry of Agriculture Jihad” (MAJ) had over 100 servers and computers, dozens of applications and databases, 37 websites, and 12 internal applications taken down. Images of Iranian Resistance leader Massoud Rajavi and Mrs. Maryam Rajavi, President-elect of the Iranian opposition coalition National Council of Resistance of Iran (NCRI), as well as an image of regime Supreme Leader Ali Khamenei with a red X, were posted on these MAJ websites. “Hail to Rajavi” and “Death to Khamenei” were also displayed.

According to social media accounts of “Ghyam Sarnegouny,” which means “Uprising – Overthrow” in Persian, “a major cyberattack targeting the regime’s Ministry of Agriculture Jihad is a campaign and response to the regime’s crackdown against protests by Iran’s oppressed farmers, especially those in Isfahan.”

The regime’s State Security Force and special units of the Revolutionary Guards (IRGC) attacked protesting farmers in Isfahan who were holding a sit-in on the Zayandeh Rud riverbed on November 25, 2021. With vehicles and motorcycles, the attacking forces stormed the protest site, firing tear gas and setting fire to the farmers’ tents. The SSF and IRGC units opened fire on the farmers who were protesting. Pellet rounds were also used, blinding a number of the helpless farmers.

In collaboration with the IRGC and IRGC Basij, the regime’s “Ministry of Agriculture Jihad” carries out the mullahs’ inhuman policies. This institution is the driving force behind the destruction of Iran’s agriculture, the increasing poverty of the country’s farmers, the skyrocketing prices of food, and the literal destruction of Iran’s environment.

The IRGC is well-known for plundering Iran’s water resources, digging tunnels to transport water, and building cities and towns in an uncontrolled manner to sell to the Iranian people and pocket massive profits. These policies are implemented through IRGC projects in collaboration with the “Ministry of Agriculture Jihad,” which has resulted in the destruction of large agricultural areas.

The regime’s institution behind the plundering of Iran’s farmers, livestock owners, and chicken farmers is the MAJ, which works in tandem with the IRGC Basij. MAJ, along with other regime-linked entities, has stolen a large portion of the country’s oil revenues.

Since August 2021, Javad Sadatinejad has led the MAJ. Sadati Nejad has a long history with the Basij, the IRGC’s paramilitary wing that is heavily involved in the repression of Iranian dissidents and protesters.

Peyman Jebeli, the regime’s head of the “Islamic Republic of Iran Broadcasting,” warned on March 25 that state TV and radio programs could be targeted in cyberattacks.

April 25 – 11:15 am #Iran time
The website of the regime's "Ministry of Agriculture Jihad" was hacked.

On a daily basis, the IRIB is the target of “tens of thousands of cyberattacks,” and the previous cyberattack on the IRIB was a “carefully calculated measure,” as per Jebeli.

Following a cyberattack that disrupted thousands of gas stations across Iran in the fall of 2021, Fereydoon Abbasi, a member of the regime’s Majlis (parliament), stated that there have been many cyberattacks that have gone unnoticed by the media. Some of the attacks were neutralized by the relevant institutions, but in others, such as the cyberattack that disrupted the country’s gas stations, there was a systematic error, and the officials involved were unable to neutralize the attack, he added.