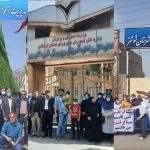 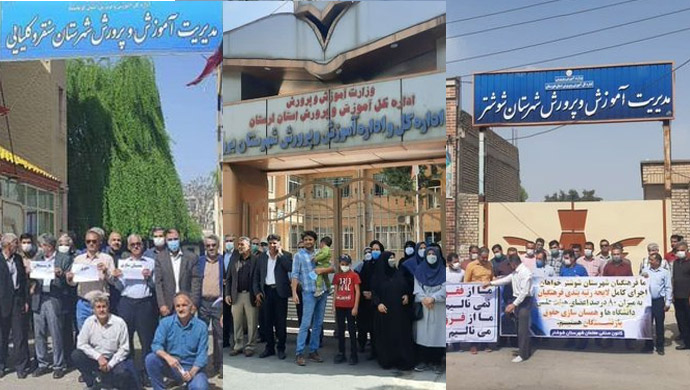 Thousands of teachers across the country took to the streets on Thursday, April 21, rallying in over 50 cities to express their economic woes and once again demand answers to their long-standing and unmet demands. The calls for these protests were made a few days before the events, and regime officials had their security forces on high alert to prevent any anti-regime demonstrations. Authorities were sending text messages to teachers in dozens of cities, attempting to create an intimidating climate of fear in order to prevent teachers from expanding their ranks and other locals from joining the protests.

These measures not only failed to resolve the dilemma in front of regime officials but also fuelled teachers’ rage and encouraged them to shift their demands from economic to political.

The nationwide protests by Iranian teachers on April 21 were the first of their kind in the new Persian calendar year, which began on March 21. From March 21 of last year to March 21 of this year, Iran saw a slew of nationwide protests, with teachers playing a key role in the fight for their rights thanks to their tenacity and determination.

Teachers rallying in this manner is a very important phenomenon for any society, particularly in Iran, where they interact with a large portion of the population, including around 14 million elementary and secondary school students, as well as their parents. The hardships and protests of the teachers are felt throughout the country, which is why the mullahs’ regime is so concerned and focused on putting an end to these street rallies.

To this day, regime officials and authorities have used a variety of tactics to quell the rallies or at the very least persuade the teachers to stay at home, including making empty promises to adjust and increase the teachers’ pay. To this day, however, it is abundantly clear that such promises are nothing more than empty promises that have kept teachers enduring their deteriorating living conditions for years.

It’s also worth noting that officials in some cities, including Tehran, had deployed a large security force near the teachers’ protest sites, followed by the arrest of dozens of protesting teachers.

On Thursday, the regime’s deputy education minister admitted that measures to correct teachers’ pay had been postponed until the end of the spring semester. This once again convinced Iran’s teachers and all observers of the status quo that, despite rising inflation and unprecedented price increases in basic goods, the regime had no intention of providing for the teachers.

The mullahs’ regime should expect these nationwide protests to become more frequent now that the new Persian calendar year has begun. This undeniable reality is raising red flags among senior regime officials, especially as International Labor Day approaches on May 1.

“Within our country, there are fault lines… In a warning to his officials in June 2016, regime Supreme Leader Ali Khamenei said, “If they are activated, there will be earthquakes!” The mullahs’ regime is already feeling the first tremors of dangerous and unavoidable social earthquakes in the year 2022.

Iranian teachers & educators once again rose up all across the country & called for the freedom of imprisoned teachers. They also demanded the eradication of discrimination against teachers. Their ire reflects the nation’s resentment towards the clerical regime’s oppression#Iran pic.twitter.com/lTqRkSwI0u