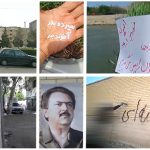 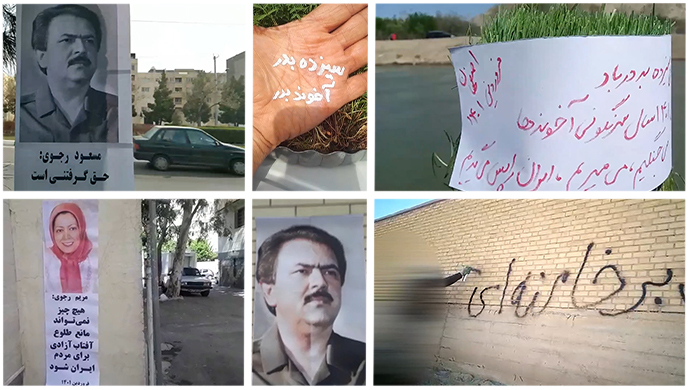 Members of the Iranian opposition PMOI/MEK across celebrate the national tradition of “Sizdah Be Dar” – on April 2, 2022.

Iranians usually go to the countryside on the 13th day of the Persian year and find a green area near a river or a lake. This tradition is known as “Sizdah Be Dar.” People tie grasses together on this day, hoping to rid themselves of all bad fortune from the previous year and wishing for the best in the coming year.

Supporters of Iran’s opposition People’s Mojahedin of Iran (PMOI/MEK) and members of the country’s growing network of Resistance Units celebrated the tradition in the hopes of overthrowing the regime by the end of the year and establishing a democratic government following the fall of Supreme Leader Ali Khamenei and the entire mullahs’ regime.

“We will rise and reclaim our legitimate rights,” the Resistance Units wrote on a large photo of Resistance Leader Massoud Rajavi that they posted in Tehran. In Tehran and other cities, similar protests were held. Several Resistance Units marched along the riverbank, broadcasting audio and video messages to Iranians. “This year will be the year of the regime’s overthrow,” a member of the Resistance Unit in Tehran said.

At the start of the year, members of the Resistance Units celebrated the new year and century in defiance of the mullahs’ suppression by reiterating their commitment to overthrow the mullahs’ regime and restore freedom in Iran.

The Iranian Resistance’s leader, Massoud Rajavi, devised a strategy based on the formation of Resistance Units within Iran, with the goal of forging a link between the revolution’s ranks and those seen in the movement’s central core, the PMOI/MEK.

Despite the fact that the “resistance units” strategy was devised years ago, it has had a widespread impact as Iran’s crises worsened and the regime’s internal schisms widen, as well as several rounds of uprising from 2018 to the present.

The MEK’s anti-crackdown campaign began on January 27 with the disruption of numerous state television and radio networks and continued with Resistance Units seizing control of loudspeakers to blast anti-regime slogans in public. And the trend is continuing right now.

It is clear that the regime’s ranks and ranks are riven with internal schisms. The Intelligence Ministry displayed a blindfolded man on February 9 claiming responsibility for anti-regime slogans being broadcast in Mashhad’s famous Bazaar Reza. Despite a propaganda campaign aimed at instilling fear in Iranians, the Iranian people and their organized resistance continue to take these actions.

Despite resorting to an increasing number of executions and oppressive measures in tandem with unbearable economic pressures, the mullahs’ regime has been unable to plunge the Iranian nation into poverty and hopelessness.

Every broadcast of anti-regime slogans in public places across the country serves as a reminder to the regime of the Iranian people’s unwavering refusal to submit to the regime’s crackdown. It’s only natural to assume that when such measures have been in place for months, the vast majority of Iran’s society is behind them.