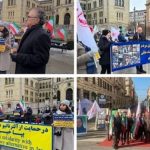 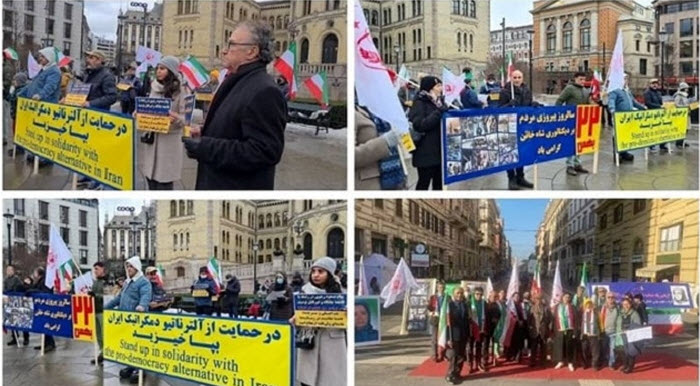 On the 43rd anniversary of Iran’s 1979 anti-monarchical revolution, freedom-loving Iranians and supporters of the Iranian opposition, the People’s Mojahedin of Iran (PMOI / MEK Iran), marched in five European cities on Saturday, February 12. Iranian Resistance supporters gathered in Cologne, Amsterdam, Oslo, Rome, and Bucharest to criticize the mullahs’ regime in Iran for its human rights violations, support for terrorism, and covert nuclear weapons program. They also expressed their support and sympathy with the Iranian opposition coalition, the National Council of Resistance of Iran (NCRI), as a democratic alternative to the mullahs’ theocracy, and committed to keeping fighting to overthrow Iran’s tyranny.

Protesters chanted anti-Iranian regime slogans in support of the NCRI and MEK, Iranian Resistance leader Massoud Rajavi, and NCRI President-elect Maryam Rajavi. These rallies took place across Europe just one day after 50 bipartisan members of the US House of Representatives held an online conference on Friday, February 11, urging the Biden administration to adopt a firm Iran policy and stand alongside the Iranian people in their fight for freedom and democracy. The event commemorating the 43rd anniversary of Iran’s anti-monarchical revolution in 1979 was held by the Organization of Iranian American Communities.

While expressing their support for the Iranian people, the representatives denounced the Iranian regime as the world’s leading state sponsor of terrorism and chastised the United States’ current attitude on the regime’s nuclear weapons program. The lawmakers also stated their support for an Iranian republic that is democratic, secular, and non-nuclear.

The meeting’s keynote speaker, Mrs. Maryam Rajavi, detailed how the 1979 revolution began with the fall of the Shah and his “violent dictatorship” and was hijacked by the Islamic fundamentalists who now rule Iran.

“The Shah tyranny was defeated by the Iranian people’s nationwide revolt 43 years ago today.” The Iranian people revolted against a terrible regime. They desired liberty and democracy. “However, because the Shah effectively suppressed all democratic movements, he paved the stage for a conservative mullah to seize power,” Mrs. Rajavi explained.

“Today, there is a significant social base for a democratic alternative. It has turned widespread societal unrest into a goal-oriented effort to overthrow the regime as a whole,” she continued.

Iran has been commemorating the 43rd anniversary of its anti-monarchical revolution in 1979, which overthrew the Shah but was later hijacked by clerics led by Ruhollah Khomeini. While the mullahs’ leadership is hell-bent on projecting a strong image of dominance, the reality on the ground tells a different picture.

A look back over the previous year reveals the intensifying confrontation between the Iranian people and their organized opposition, on the one hand, and a failing regime, on the other, urgently striving to stay in power.

Despite the regime’s repression and the West’s continued indulgence, the mullahs are terrified that the Iranian people and organized resistance pose an existential threat to their survival.

February 10, 2022—On the anniversary of the 1979 Revolution which ousted the Shah regime from Iran, people in different cities of the country called for the overthrow of the mullahs’ regime. In Fardis, Sarasiyab, and Shahr-e Rey, anti-regime slogans were broadcast through loudspeakers in different parts of the city, including shopping centers and bazaars.