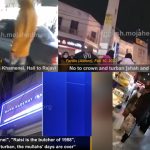 MEK : Commemoration of the Iranian Revolution in 1979

Written by Esmail Mohades on February 15, 2022. Posted in NEWS 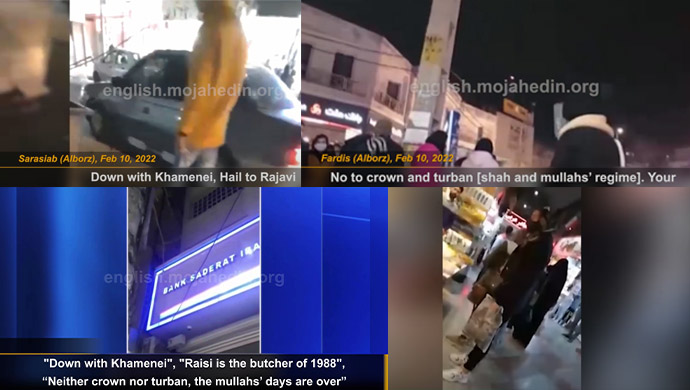 “The mullahs’ days are over!” “No to crowns and turbans!”

As Iran commemorated the 43rd anniversary of the revolution that deposed the Shah’s dictatorship in 1979, the governing mullahs attempted to portray their system in a positive light. However, anti-regime sentiments were aired through loudspeakers in shopping malls and other areas in various cities, much to their disgust. Residents of Shahr-e Rey (south of Tehran) and the Sarasiab and Fardis districts of Karaj, a large city west of Tehran, heard anti-regime shouts on Thursday, February 10.

“Death to Khamenei, Viva Rajavi!” referring to regime Supreme Leader Ali Khamenei, Iranian Resistance leader Mr. Massoud Rajavi, and President-elect Mrs. Maryam Rajavi of the opposition coalition, the National Council of Resistance of Iran (NCRI).”Iranians are well aware of the Shah and the clerics, and they despise them!” in reference to the Iranian people’s opposition to the Shah’s dictatorship, which was deposed in 1979, and the theocracy of the current mullahs.”The mullahs’ days are over!” “No to crowns and turbans!”

“Death to Khamenei! Damn with Khomeini!” the latter being in reference to the mullahs’ regime former supreme leader Ruhollah Khomeini.“Down with Khamenei and Raisi!” the latter being in reference to current regime President Ebrahim Raisi.Segments of a talk delivered by Mrs. Rajavi on the overthrow of the mullahs’ regime, as well as a statement was given by Mr. Rajavi about the “heroic Iranian people overthrowing the dictatorship,” were repeatedly broadcast in Karaj’s Sarasiab area. 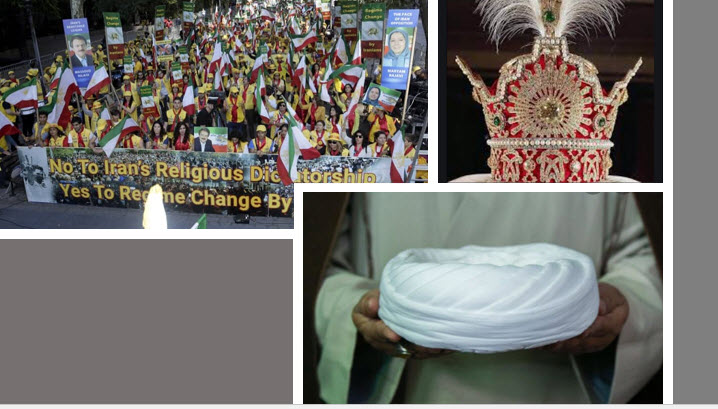 “Death to Khamenei! Damn with Khomeini!” the latter being in reference to the mullahs’ regime former supreme leader Ruhollah Khomeini.“Down with Khamenei and Raisi!”

Anti-regime slogans were broadcast through the loudspeakers of a Saderat Bank branch in Shahriar, west of Tehran, on February 11, the anniversary of the 1979 Revolution. The audio includes slogans that referred to Raisi as a butcher, called for the mullahs’ rule to be overthrown, and praised MEK leaders. People are being told that the bank’s audio system has been hacked, and they are being asked to leave the area and not to listen to the slogans. The incident follows a similar episode on February 9 in Mashhad’s Bazaar Reza market, Iran’s second-largest city. The following were some of the slogans heard on the radio: “Viva Rajavi! Down with Khamenei!” “Down to oppressors, whether it’s the Shah or the [supreme] Leader!” “Down with Khamenei! Khomeini must go! Viva MEK!”

A song was also broadcast with this verse: “Rise up to uproot the enemy’s castle!”On January 27, hundreds of television and radio networks were disrupted, displaying images of Massoud Rajavi and Maryam Rajavi, dealing severe damage to the regime’s propaganda apparatus.  On several state television networks, a crossed-out image of Khamenei was also broadcast. The images also include video footage of Massoud Rajavi saying, “Today, we still honor the time when we pronounced reactionary death.” We stood firm in our convictions.” 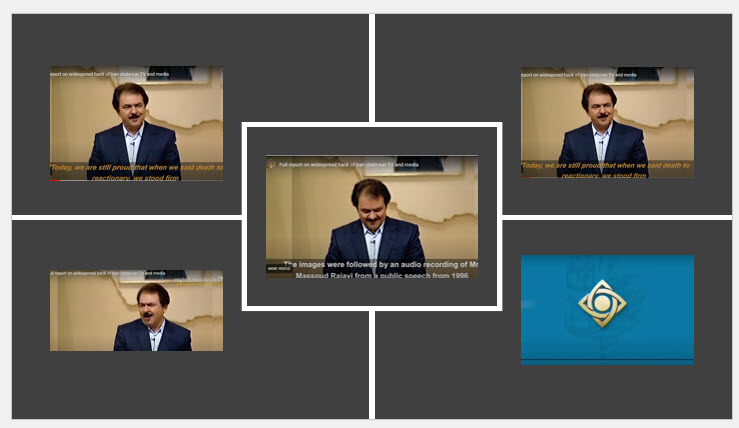 The images also include video footage of Massoud Rajavi saying, “Today, we still honor the time when we pronounced reactionary death.” We stood firm in our convictions.”

According to insiders providing reports from inside Iran’s TV and radio networks, “more than 600 TV and radio servers were offline and entirely destroyed.”According to accounts from within the government, “Footage relating to the MEK was unexpectedly aired at 3:00 pm local time on 14 TV and 13 radio stations, and we were caught off guard.”Despite exhausting all resources, the government was unable to repair the damage to its propaganda machine, replace the affected pieces, and restore normality 12 days after the state radio and television networks were disrupted, according to intelligence gathered by the MEK from within Iran.

February 10, 2022—On the anniversary of the 1979 Revolution which ousted the Shah regime from Iran, people in different cities of the country called for the overthrow of the mullahs’ regime.