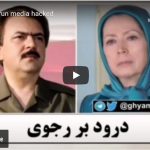 Written by Esmail Mohades on February 11, 2022. Posted in NEWS 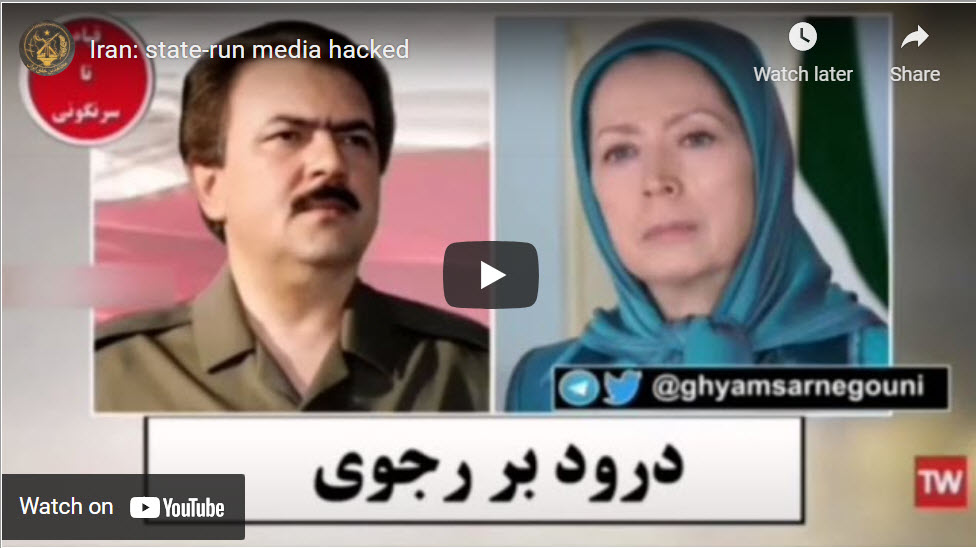 At 3:00 p.m. local time on Thursday, January 27, many of Iran’s state broadcasting network’s TV and radio stations were disrupted, airing footage of Iranian Resistance leader Massoud Rajavi and Mrs. Maryam Rajavi, President-elect of the Iranian opposition coalition National Council of Resistance of Iran (NCRI),. The disrupted sequence also featured visual and audible chants such as “Death to Khamenei!” in reference to the regime’s Supreme Leader Ali Khamenei, and “Viva Rajavi!” in reference to Iran’s opposition leaders. On several state television networks, a crossed-out image of Khamenei was also broadcast.

Iranian regime officials and state media outlets continue to express concern about the impact of the 10-second blackout of state television and radio networks on January 27. Officials in the regime are fully aware of the long-term implications of such a development in Iran’s society, which has been subjected to decades of restriction and statements by state media that there is no viable opposition or alternative to the regime.

“We anticipated the competent security apparatus to respond and reveal data regarding the source of the attack and how it happened following the attack targeting the state TV and radio network. This includes the Presidency-affiliated Strategic Management Center. “The [Iranian opposition People’s Mojahedin of Iran (PMOI / MEK Iran)] will not go unpunished for disrupting official television transmission. Alireza Salimi, a member of the regime’s Majlis, remarked, “We need to offer a robust response to the [PMOI/MEK]” (parliament). 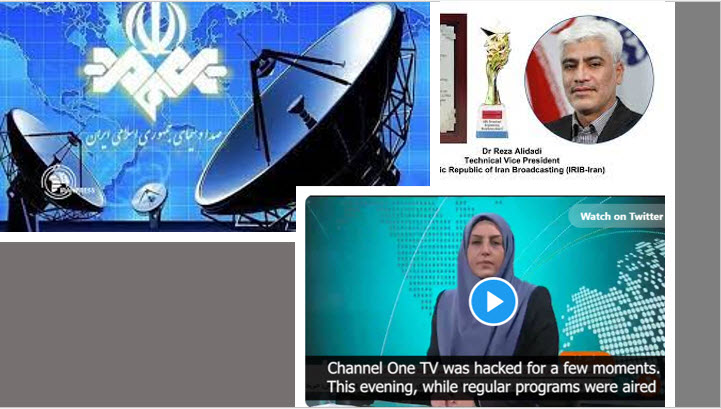 According to a story published on February 1 on the state-run Eghtesad Online website, “this institution is tasked with determining the source of the attack and providing information in this regard.”

Hundreds of national radio stations, provincial and local TV stations, and their audio, video, and transmission were badly disrupted, according to a statement made by the MEK on January 31. Furthermore, control sheets reveal that regime radio and television stations broadcast over 2,000 ‘important’ warnings.”

The “comprehensive monitoring” system for the “Islamic Republic of Iran Broadcasting (IRIB)” clearly shows that the uplink feed from 25 national television channels on Intelsat satellites and 20 national television channels on Badr satellites were completely shut off as of Thursday afternoon, January 27, 2022… The IRIB is well known for being one of the most heavily budgeted and sensitive entities for the clerical government, and it is used for suppression and censorship alongside the IRGC, intelligence agencies, and the State Security Force. Along with the Quds Force, the group also serves to export fanaticism and foment terrorism overseas.

The mullahs’ regime retaliated by conducting a series of distributed denial-of-service (DDOS) strikes against several Iranian Resistance sources. Tehran has been attempting to take down the Iranian Resistance’s websites. The main websites of the MEK, the NCRI, and Maryam Rajavi are among the targets.

According to a statement made by the MEK on January 31. Furthermore, control sheets reveal that regime radio and television stations broadcast over 2,000 ‘important’ warnings.”

Because the IRIB operates in a highly insulated and closed intranet system, it is extremely difficult, if not impossible, to penetrate from the outside, the regime’s own experts described the January 27 disruption as a complicated and multi-pronged attack involving sophisticated technology and a human element on the ground. However, the impact of the disruption on the regime’s propaganda apparatus is far more critical. A rising number of regime officials are expressing major concerns about infiltration among their ranks and ranks, exposing the government’s frail apparatus and the growing anti-Iranian sentiment.

“Mr. Raisi!” exclaims the narrator. In a Farsi tweet, former Majlis member deputy Hamid Rasaie said, “You should expect your government to be hacked when six months into your administration you have changed less than 400 officials from the 3,400 sensitive posts across the executive branch in various ministries, departments, organizations, banks, institutions, and other provincial branches, and most government directors from the previous administration are still in their posts.”