Written by Mohsen Aboutalebi on November 5, 2021. Posted in NEWS

The last G20 Summit in Italy ended with world powers remaining unsure and cautious about the status of Iran’s nuclear activities, as well as if the regime will cooperate and re-join nuclear talks in Vienna.

Joint statement of the G20 Summit in Italy

The elected leaders of the United States, Germany, France, and the United Kingdom issued a joint statement saying that the “only guaranteed way to prevent a disastrous escalation” is to complete discussions “as soon as possible.”

The regime has been biding its time and delaying plans to re-enter negotiations while expanding its nuclear program and extorting commitments from the international community, as well as denying UN inspectors access to their nuclear sites for routine maintenance checks. 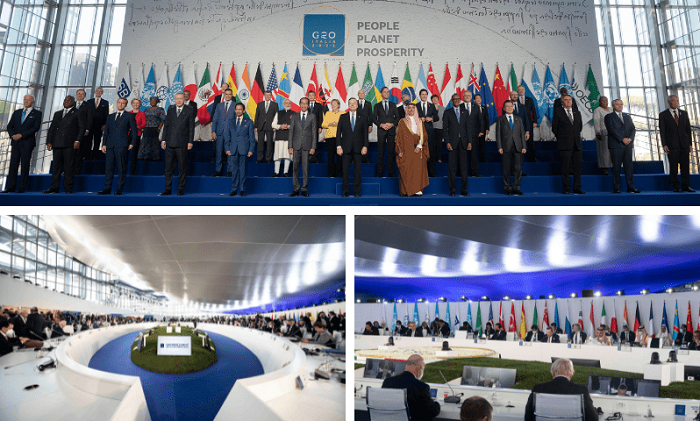 (PMOI / MEK Iran) and (NCRI): The G20 Summit ended with the adoption of the G20 Rome Leaders’. Declaration.

The regime’s relentless testing of its counterparts

“The regime’s relentless testing of its counterparts’ will, is also causing concerns among its own analysts and officials, several of whom have cautioned about the implications of taking provocative steps towards the West,” claimed the main Iranian opposition, the National Council of Resistance of Iran (NCRI), and the Mojahedin-e Khalq (PMOI/ MEK Iran).

In the past, the regime has only engaged in talks in order to avoid being sanctioned by international powers. The terrible state of Iran’s economy means that society is on the edge of exploding, and the only thing stopping the Iranian people from overturning the regime is the regime’s repressive security forces, which are ruthlessly suppressing protests.

The ongoing protests across the country

The ongoing protests across the country are on the verge of turning into an uprising similar to that of November 2019, if not worse. The dictatorship was on the point of collapse two years ago, so with the current difficulties and a restive people living in great poverty and with nothing to lose, the next upheaval is likely to completely destabilize the system.

“The regime has two paths out of the current dilemma, all of which will have dire consequences for the rule of the mullahs. First, the regime can continue to avoid nuclear negotiations and instead slash expenses on ballistic missiles, nuclear weapons, and backing terrorist groups in the region,” as per the MEK.

If expenses are minimized, the authorities will have more money to address the problems of Iranian citizens, who have been protesting regularly in recent months. The regime, on the other hand, is concerned that if they stop sponsoring terrorist proxy groups in the Middle East, they will be forced to ‘battle for survival on the streets of Tehran, Mashhad, Isfahan, and other major Iranian cities.’

The regime’s second alternative is to abandon its stalling tactics and resume negotiations. This would almost certainly result in the lifting of sanctions and the easing of economic pressure on Iran. The regime fears that such a step would lead to their eventual demise, hence it is unlikely to happen. In any case, the regime’s continued disdain for international rules has brought them to an impasse, from which the only way forward is destruction.