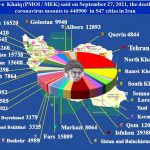 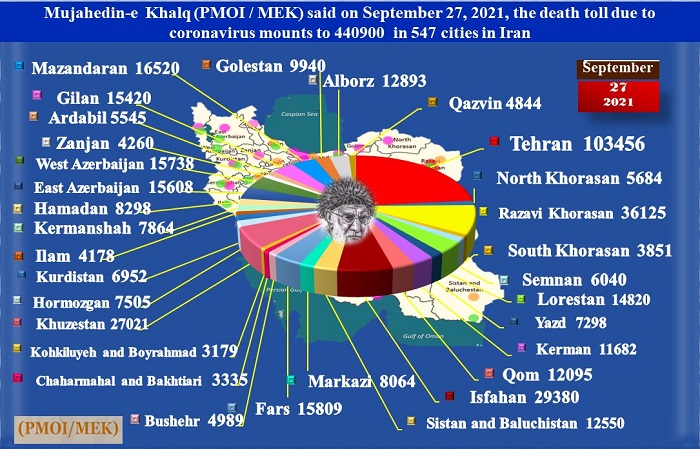 The National Council of Resistance of Iran (NCRI), and the People’s Mujahedin of Iran (PMOI / MEK Iran), 440,900 people had died in Iran as a result of the Covid-19 outbreak as of September 27.

Alireza Zali, deputy head of the National Coronavirus Combat Taskforce (NCCT) in Tehran: Unlike the last four weeks, in which we were observing a declining pattern, yesterday we saw an increase in statistics, which could be alarming. (Mehr news agency, September 27, 2021)

Ahvaz Jundishapur University of Medical Sciences spokesperson said: “We are worried about the next COVID-19 outbreak that will occur in November,”. (ISNA news agency, September 27, 2021)

(NCRI) and (PMOI / MEK Iran): COVID-19 fatalities in 547 cities exceed 440,900. Tehran is in crisis as long as we don’t have a national system to evaluate mutated viruses, we will always be facing threats and we need to definitely provide measures to have an immediate and timely response,” said a senior health official in Tehran.

Ardabil University of Medical Sciences spokesperson said: “Coronavirus is still dangerous, and we may see a Coronavirus surge again in the Province,”.

Isfahan University of Medical Sciences spokesperson said: “The COVID-19 statistics in the Province, not including Aran va Bidgol is 2,105 hospitalized, 356 patients are in ICU, and 29 died during the past 24 hours,”. (IMNA news agency, September 27, 2021)