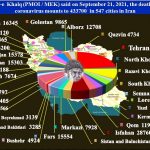 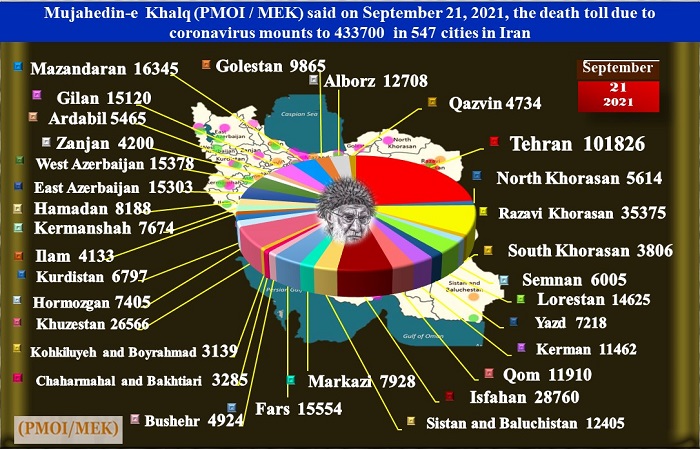 The National Council of Resistance of Iran (NCRI), and the People’s Mujahedin of Iran (PMOI / MEK Iran), 433,700 people had died in Iran as a result of the Covid-19 outbreak as of September 21.

The regime Health Minister: In some provinces, the death toll and the high number of COVID-19 infections are a disaster. I went to nine provinces; I saw all the ICUs. The situation is terrible. We have lost the trust of people. They do not trust my words as a minister because someone else says the opposite. (ISNA news agency, September 21, 2021)

(NCRI) and (PMOI / MEK Iran): COVID-19 fatalities in 547 cities exceed 433,700. Tehran is in crisis as long as we don’t have a national system to evaluate mutated viruses, we will always be facing threats and we need to definitely provide measures to have an immediate and timely response,” said a senior health official in Tehran.

According to Rasht governor, “Half a percent of the city’s population of 881,000 have died due to COVID-19. If we extend this to the entire country, the number of victims will be 420,000, while the death rate in remote cities and villages is much higher due to the lack of basic medical facilities.” (IRNA, September 21, 2021)

Kerman University of Medical Sciences spokesperson said: “During the past 24 hours 29 patients have lost their lives and 559 are hospitalized,”. (Tasnim news agency, September 21, 2021)