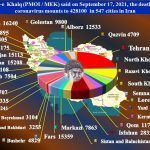 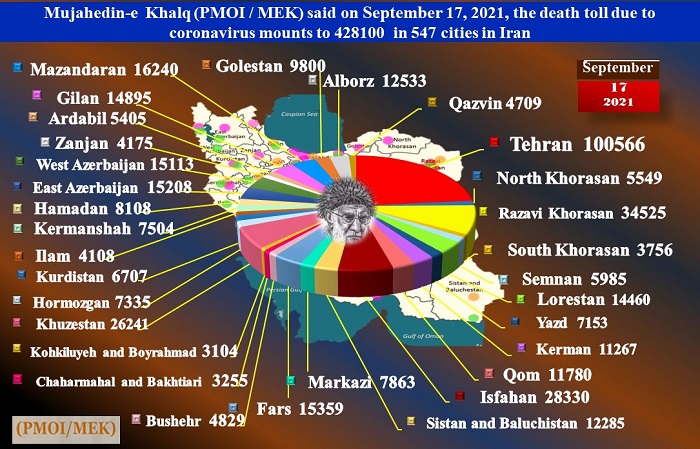 According to the Iranian opposition group The National Council of Resistance of Iran (NCRI), and the People’s Mujahedin of Iran (PMOI / MEK Iran), 428,100 people had died in Iran as a result of the Covid-19 outbreak as of September 17.

One death and 37 hospitalizations every three minutes indicate that the COVID-19 situation is still fragile. (Tasnim news agency, September 17, 2021)

“There is a long way to go to return to the COVID-19 status that we were in January 2021; also, we should not ignore the sixth outbreak, which may begin in November.” (State-run media, Salamat news, September 17, 2021)

Kurdistan University of Medical Sciences spokesperson said: “The number of COVID-19 patients and hospitalizations increases every moment, and the hospitals are full,”. (Tasnim, September 17, 2021)

(NCRI) and (PMOI / MEK Iran): COVID-19 fatalities in 547 cities exceed 428,100. Tehran is in crisis as long as we don’t have a national system to evaluate mutated viruses, we will always be facing threats and we need to definitely provide measures to have an immediate and timely response,” said a senior health official in Tehran.

Qazvin University of Medical Sciences spokesperson said: “Compared to yesterday, the number of COVID-19 infections, those in ICU, and the death toll have increased by 33%, 8%, and 40%, respectively,”. (Tasnim, September 17, 2021)

West Azerbaijan University of Medical Sciences spokesperson said: “The (high number of) Coronavirus death toll continues in the Province, and 27 people died in the past 24 hours,”. (Mehr news agency, September 17, 2021)

Isfahan and Kashan University of Medical Sciences: “We have 3363 coronavirus patients hospitalized, of which 532 are in ICUs. During the past 24 hours 50 patients have lost their lives,” according to a statement released on Friday.

Semnan University of Medical Sciences spokesperson said: “The increasing number of new cases is concerning and the daily numbers of confirmed positive cases have reached more than 200 per day,” according to a statement released on Friday.