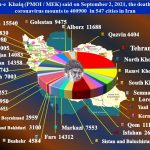 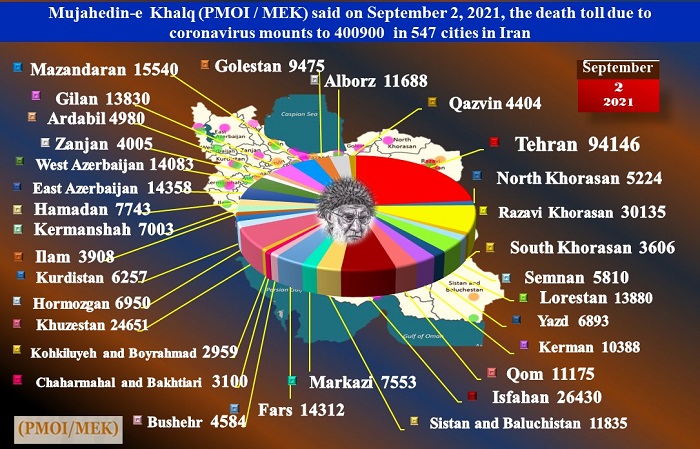 The National Council of Resistance of Iran (NCRI), and the People’s Mujahedin of Iran (PMOI / MEK Iran), reported that the coronavirus death toll in 547 cities surpasses 400,900.

Raisi tries to minimize the dimensions of COVID-19 deaths

In fear of the exposure of the dimensions of COVID-19 deaths, Ebrahim Raisi, the regime’s president, said today, “Spreading information about the various aspects of the Coronavirus disease and related issues should be organized with the aim of creating maximum hope and refraining from creating fear and anxiety in the people … We should not publicize topics that naturally flow in the specialized field of various sciences, including medical science, and cause anxiety and fear among the people.”

(PMOI / MEK Iran) and (NCRI): The ascension of Ebrahim Raisi to the presidency coincided with an increase in Covid-19 casualties in Iran. Coronavirus.

Poor vaccination has impacted the nurses

Mohammad Sharifi-Moghaddam, secretary-general of the Nurses’ House said, today, “The consequences of the unwise policies and poor vaccination has impacted the nurses. In the Health Ministry’s system, prevention is not considered important, and most of the health care budget is spent on medicine and the treatment of patients.

(NCRI) and (PMOI / MEK Iran): Healthcare workers have blamed the high rate of infections on the lack of proper personal protective equipment (PPE) for medical staff and patients and the limited number of vaccine doses in Iran.

Ahvaz University of Medical Sciences spokesperson said: “Eight cities in Khuzestan province lack hospitals. In the city of Ahvaz, we are running short of 2,000 beds. Currently, there are 3,000 hospitalized across Khuzestan. Last night there were no beds available in Razi Hospital and we were forced to place patients in the hallways of Khomeini Hospital,” ISNA news agency.

(NCRI) and (PMOI / MEK Iran): COVID-19 fatalities in 547 cities exceed400,900. Tehran is in crisis as long as we don’t have a national system to evaluate mutated viruses, we will always be facing threats and we need to definitely provide measures to have an immediate and timely response,” said a senior health official in Tehran.

Qom University of Medical Sciences spokesperson said: “Around 300 coronavirus patients in Qom are in dire conditions and most are held in ICUs. Most of the patients are in need of ventilators. The Covid-19 trend in Qom is not decreasing at all and we are on the verge of having 1000 coronavirus patients hospitalized across the province. The number of dire patients is on the rise,”  IRNA news agency.

Mrs. Maryam Rajavi, the President-elect of the National Council of Resistance of Iran (NCRI), said that with the most conservative estimates, the Coronavirus death toll has exceeded 400,000, the largest per capita death toll anywhere in the world. Mrs. Rajavi expressed her condolences to the general public, especially the victims’ relatives, and wished the patients a speedy recovery.

Mrs. Rajavi pointed out: The lives and health of the Iranian people are of no value to Khamenei; he only thinks of preserving the disgraceful rule of Velayat-e-Faqih. Prohibiting the import of vaccines, failing to cover the bare minimums for the laborers, and forcing them to go to work to make ends meet, the nonpayment of the salaries of the medical staff are part of the regime’s misconduct in this regard.

The regime’s policies on dealing with the Coronavirus are undoubtedly categorized as crimes against humanity. The leaders of this regime, especially Khamenei, the current president and his predecessor, Ebrahim Raisi and Hassan Rouhani, and Saeed Namaki, the former Health Minister, must therefore be brought to justice.