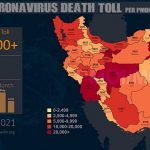 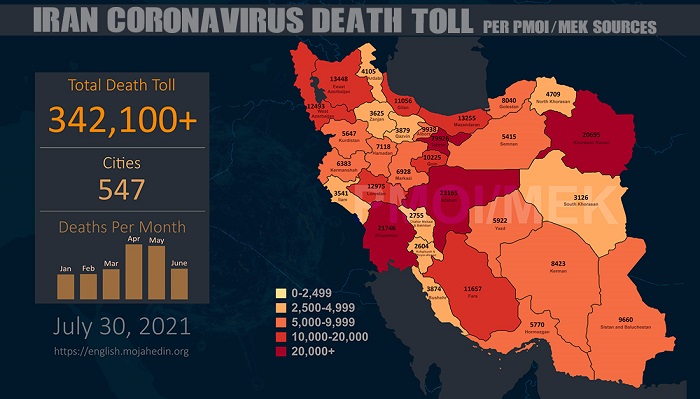 The National Council of Resistance of Iran (NCRI), and the People’s Mujahedin of Iran (PMOI / MEK Iran), reported that the coronavirus death toll in 547 cities surpasses 342,100.

Hospital beds in Tehran and provincial centers are 100% full

The fact that the hospital beds in Tehran and provincial centers are 100% full shows that the COVID-19 situation is not good. (Mehr news agency, July 30, 2021)

Former regime MP after vaccination: Only Chinese Sinofarm was injected, and there was no news of the Iranian vaccine. It’s these types of lies that undermine people’s trust. (State-run media, Khabar-Online, July 30, 2021)

Golestan University of Medical Sciences spokesperson said: “The COVID-19 situation of all 14 cities of this Province is red and, in some places, they are super red and turning black,”. (IRNA news agency, July 30, 2021)

(NCRI) and (PMOI / MEK Iran): COVID-19 fatalities in 547 cities exceed 342,100. Tehran is in crisis as long as we don’t have a national system to evaluate mutated viruses, we will always be facing threats and we need to definitely provide measures to have an immediate and timely response,” said a senior health official in Tehran.

Hormozgan University of Medical Sciences spokesperson said: “On July 29, 2021, we had 20 deaths in COVID-19 patients, the highest death toll since the beginning of the epidemic,”. (Mehr, July 30, 2021)

Mashhad University of Medical Sciences spokesperson said: “If the city is not completely locked down due to COVID-19 infections, a catastrophe will be on the way. How can we put it (for the state to understand) that the capacity of Mashhad hospital beds is running out?” (ISNA news agency, July 30, 2021)

West Azerbaijan University of Medical Sciences spokesperson said: “The number of people being hospitalized had lowered to triple digits in the past week. However, this figure has again reached 1024, of which 181 are in ICUs,”. (IRNA news agency, July 30, 2021)