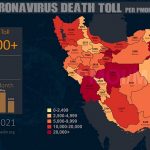 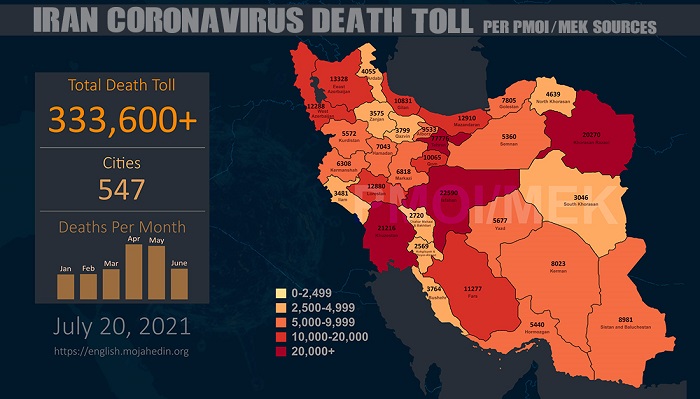 The National Council of Resistance of Iran (NCRI), and the People’s Mujahedin of Iran (PMOI / MEK Iran), reported that the coronavirus death toll in 547 cities surpasses 333,600.

Ther is no empty bed

Tehran Sina Hospital Emergency spokesperson said: “We have dozens of calls every day looking for an empty bed. Sometimes to keep the patient in the emergency room, they use a blanket on the floor,”. (ISNA news agency, July 20, 2021)

Beheshti University of Medical Sciences spokesperson said: “Over the next two weeks, we expect more COVID-19 cases and an increase in deaths,”. (Tasnim news agency, July 20, 2021)

Ardabil University of Medical Sciences spokesperson said: “Coronavirus deaths have increased by four times in the past 24 hours in Ardabil,”. (ISNA, July 20, 2021)

(PMOI / MEK Iran) and (NCRI): COVID-19 fatalities in 547 cities exceed 333,600. Tehran is in crisis as long as we don’t have a national system to evaluate mutated viruses, we will always be facing threats and we need to definitely provide measures to have an immediate and timely response,” said a senior health official in Tehran.

Golestan University of Medical Sciences spokesperson said: Three weeks ago, the number of COVID-19 patients admitted to the Province was 230, but now it has reached one thousand. 13 out of 14 cities in the Province are red. (ISNA, July 20, 2021)