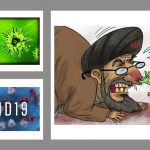 The National Council of Resistance of Iran (NCRI), and the People’s Mujahedin of Iran (PMOI / MEK Iran), reported that the coronavirus death toll in 547 cities surpasses 327,600.

(NCRI) and (PMOI / MEK Iran): COVID-19 fatalities in 547 cities exceed 327,600. Tehran in crisis as long as we don’t have a national system to evaluate mutated viruses, we will always be facing threats and we need to definitely provide measures to have an immediate and timely response,” said a senior health official in Tehran.

The deputy health minister Haririchi said: “While Hormozgan has 2.2 percent of the country’s population, it has 9 to 11 percent of hospitalizations,”.

(NCRI) and (PMOI / MEK Iran): Highest Daily Covid Deaths Ever in Iran. The People’s Mojahedin Organization of Iran announced on Monday, July 13, 1400, that the number of Coronavirus casualties in 547 cities is more than 327,600.

In Hormozgan, “the number of patients, mostly villagers, is so high that patients are treated in hospital corridors” (Iran newspaper, July 12, 2021).

The head of the health center in Qom said: ‘The percentage of positive PCR tests exceeded 70%, and this shows that Qom has entered the fifth peak’ (IRNA, July 12, 2021).