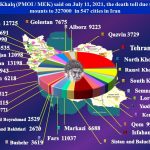 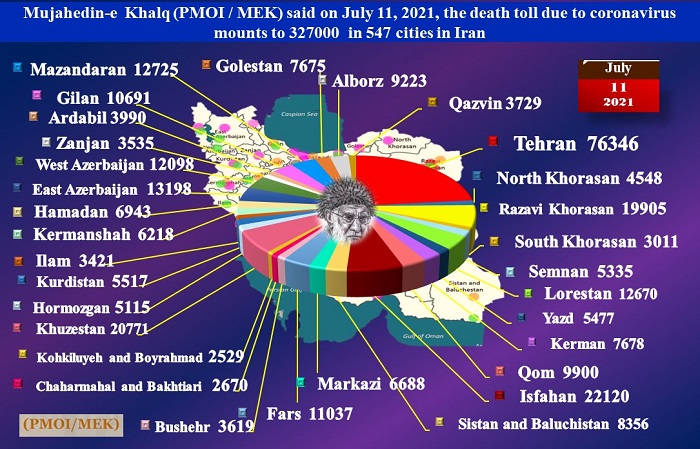 The National Council of Resistance of Iran (NCRI), and the People’s Mujahedin of Iran (PMOI / MEK Iran), reported that the coronavirus death toll in 547 cities surpasses 327,000.

Haririchi, the regime’s deputy health minister said: “74% of cities are red and orange, Last week, we had a 40%  increase in positive outpatient cases, a 17%  increase in positive hospitalizations, and a 10% increase in positive deaths. In Tehran, orthopedic cases have increased by 47%. Hormozgan has 11%, Kerman 9% and Sistan and Baluchestan 4% of the total hospital, ie 24%. While they do not make up more than 6 or 7% of the country’s population,”. (State-run TV, July 10, 2021).

Hashemi, chairman of the Tehran City Council, said: ‘The number of coronavirus victims in Tehran has reached 100 per day. Many countries, including our neighbors, have crossed the 50% threshold in vaccination, while we are at the 5% threshold”. (Eqtesad News, July 11, 2021).

In Yazd, the number of hospitalizations has continued to rise for the sixth consecutive week and the death rate has also increased and is further away from the national average (ISNA, July 11, 2021).

The Zahedan prosecutor in Sistan and Baluchestan, said: “Sistan morgues are full of corpses. It can not be denied. Why does the Minister of Health say that we have empty beds here? ”(IRGC News Agency, July 11, 2021).

(NCRI) and (PMOI / MEK Iran): The mullahs regime’s cruelties in preventing the import of vaccines from U.S., Britain, or Franc.

Isfahan University of Medical Sciences spokesperson said: ‘The hospitalization rate for coronavirus patients has increased by 20% in recent weeks and the upward trend is rapid. 40% of the coronavirus test in the province is positive ‘(IRNA, July 11, 2021).

(NCRI) and (PMOI / MEK Iran): Thousands die due to coronavirus in Iran and the regime unable to stop it.

(PMOI / MEK Iran) and (NCRI): Too Many Iranian Health Workers Dying from Covid-19.