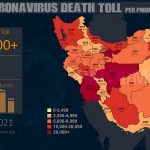 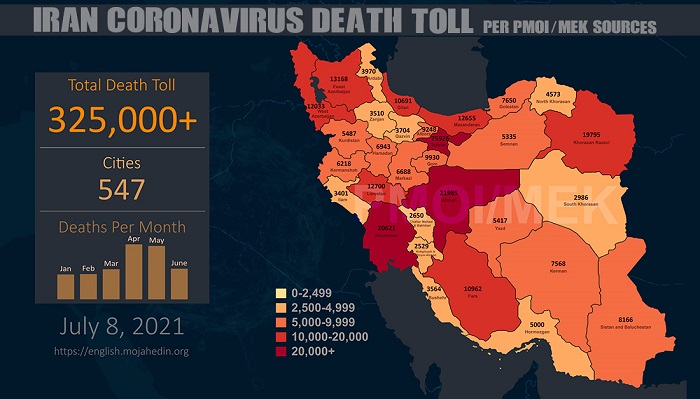 The National Council of Resistance of Iran (NCRI), and the People’s Mujahedin of Iran (PMOI / MEK Iran), reported that the coronavirus death toll in 547 cities surpasses 325,000.

The mullahs’ regime Health Ministry spokesperson said: The number of COVID-19 patients in the past 24 hours was 23,391, which is the highest number in the past 78 days and double the previous week. (IRNA news agency, July 8, 2021)

The head of Razi Hospital in Ahvaz said: The hospital is full. We have 450 COVID-19 patients now, whereas, in the previous outbreaks, there were 45 patients. (ISNA news agency, July 8, 2021)

The Scientific Committee of the National Coronavirus Combat Taskforce (NCCT) member Minoo Mohraz said: The third phase of “the Iranian-Cuban vaccine” was injected for some people in Iran. Still, the Cuban ambassador stated that we do not have such a project.  We and the South American countries need more help, and priority is given to them. (Hamshahri daily, July 8, 2021)

The head of NCCT in Tehran Alireza Zali said: 5,600 COVID-19 patients are hospitalized in 105 hospitals in Tehran Province. The east and southeast of the Province suffer from numerous infrastructure deficiencies on par with some deprived provinces. (IRNA, July 8, 2021)

Mashhad University of Medical Sciences spokesperson said: The COVID-19 Mortality (in this outbreak) is in double digits, and hospitalizations are increasing. Outpatients are 50% more than what it was in late June. (ISNA, July 8, 2021)

Isfahan University of Medical Sciences spokesperson said: “During the past 24 hours we have had 1036 new coronavirus cases across Isfahan province, of which 268 were hospitalized, and only 139 were released from the hospital,”. (Mehr news agency, July 8, 2021)

Hormozgan University of Medical Sciences spokesperson said: “Each day we have 200 patients hospitalized and 110 need ICUs. In the Mohammadi Hospital of Bandar Abbas, all four ICU branches have reached their full capacities. The city of Bandar Abbas is registered as a hyper red zone, and the cities of Minab Bandar-e Lenge are also in critical conditions. Next week the death rate will be increasing,”. (Mehr news agency, July 8, 2021)