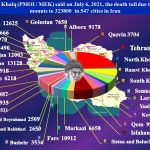 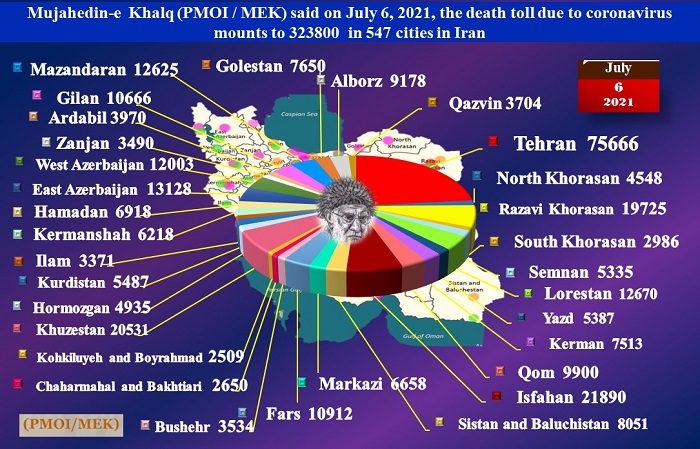 The National Council of Resistance of Iran (NCRI), and the People’s Mujahedin of Iran (PMOI / MEK Iran), reported that the coronavirus death toll in 547 cities surpasses 323,800.

(NCRI) and (PMOI / MEK Iran): COVID-19 fatalities in 547 cities exceed 323,800. Tehran in crisis as long as we don’t have a national system to evaluate mutated viruses, we will always be facing threats and we need to definitely provide measures to have an immediate and timely response,” said a senior health official in Tehran.

Health Ministry, the COVID-19 status spokesperson said: “The Red cities have increased to 120, orange, yellow and blue cities are 182, 146, and zero, respectively”.

The head of the National Coronavirus Combat Taskforce (NCCT) in Tehran Alireza Zali said: “This week, the number of COVID-19 outpatients in Tehran increased by 24.4%, and the death rate by 13.5%”. (The state-run media, Javan, July 6, 2021)

The deputy head of NCCT in Tehran Nader Tavakoli said: “The Delta variant has been identified among patients in Tehran”. (IRNA news agency, July 6, 2021)

Alireza Zalia added: “A significant number have been vaccinated in neighboring countries, and we are left alone. Domestic production does not meet our needs”. (Javan, July 6, 2021)

Zahedan University of Medical Sciences spokesperson said: “The number of COVID-19 patients in the previous two outbreaks was between 300 and 400 in the Province, but in the new outbreak, it has surged five-fold to 1,500”. (ISNA news agency, July 6, 2021)

Isfahan University of Medical Sciences spokesperson said: “During the past 24 hours 183 patients have been hospitalized while only 141 have been released,”. (Mehr news agency, July 6, 2021)