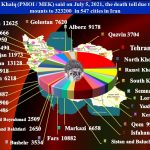 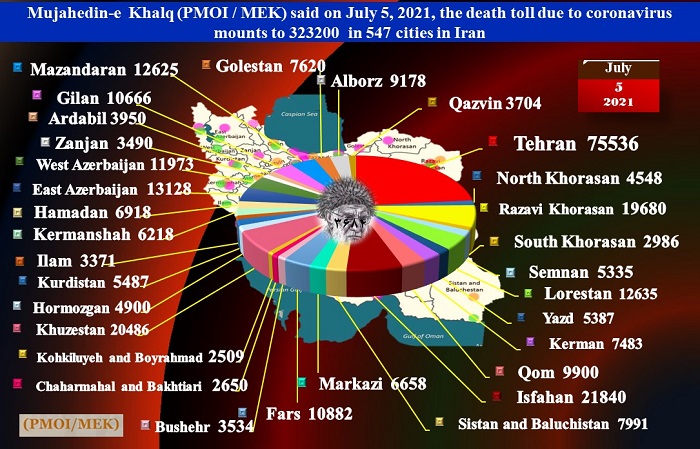 The National Council of Resistance of Iran (NCRI), and the People’s Mujahedin of Iran (PMOI / MEK Iran), reported that the coronavirus death toll in 547 cities surpasses 323,200.

(NCRI) and (PMOI / MEK Iran): COVID-19 fatalities in 547 cities exceed 323,200. Tehran in crisis as long as we don’t have a national system to evaluate mutated viruses, we will always be facing threats and we need to definitely provide measures to have an immediate and timely response,” said a senior health official in Tehran.

The regime’s Health Minister Saeed Namaki said: To say we will not have a fifth COVID-19 outbreak is not true. It has been two months since the Indian variant, New York, and African variants have arrived in the country. (Mehr news agency, July 5, 2021)

Masih Daneshvari Hospital spokesperson said: The cause of death of COVID-19 patients is among the classified secrets of the Health Ministry and will not be made public under any circumstances. (Tejarat News, July 5, 2021)

The regime member of parliament

The regime parliament deputy from Khash said: The situation in Sistan and Baluchestan is beyond catastrophe, but Namaki (the Health Minister) described the shortcomings as “propaganda, and sedition.” (ISNA, July 5, 2021)

The head of the National Coronavirus Combat Taskforce (NCCT) in Tehran Alireza Zali said: In Tehran, in the past 24 hours, the number of COVID-19 outpatients has reached 13,000, the hospitalized patients 1,695, and the total number of hospitalizations has reached 5,400. (ISNA news agency, July 5, 2021)

The NCCT Scientific Committee member Minoo Mohraz said: The Covid-19 Delta variant messed everything up when it arrived.  The Delta COVID-19 variant used to be in the south, and it should have been stopped. Now it has spread to all the cities. You have to see what’s going on in hospitals and ICUs. One cannot plan (how to deal with the virus) without going to hospitals and ICUs and seeing the extent of the outbreak. (Hamshahri daily, July 5, 2021)