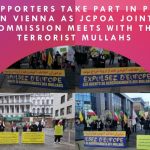 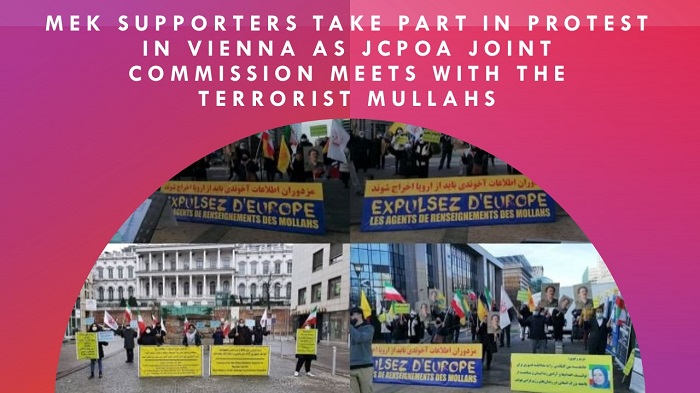 (PMOI / MEK Iran) and (NCRI): MEK Supporters demand: The EU should take these measures because the regime continues executions, torture, repression, terrorist operations, and enriching uranium for obtaining a nuclear bomb,” they reiterated.

Following the most recent round of preliminary negotiations in Vienna, European negotiators voiced optimism about the chance of persuading Iran to re-join the 2015 nuclear deal. The European Union’s coordinating envoy told media on Wednesday that he expects the sixth round of talks to be the final one. However, American officials responded with skepticism, saying that they, too, anticipated a resolution, but that it will take much more back-and-forth between the seven parties to the deal.

The absence of specific concessions

The National Council of Resistance of Iran (NCRI), and the People’s Mujahedin of Iran (PMOI / MEK Iran), reported that in the absence of specific concessions from the Iranian regime, possibilities for restoring the status quo appeared to emerge last January with the US presidential transition, but the US has so far opposed European pressure to simply relinquish all the conditions re-imposed or newly imposed by Trump’s administration.

Meanwhile, that regime has pushed on precisely this result, rejecting any proposals for a compromise accord in which some sanctions are withdrawn in exchange for the reinstatement of some limitations at Iranian nuclear installations.

The Iranian regime has continued its nuclear activities

Nevertheless, the Iranian regime has continued to ramp up its nuclear activities, greatly surpassing some of its previous successes before the adoption of the JCPOA.

The government boasted of starting production of uranium metal, a material with almost no other utility than to serve as a vital component in the core of a nuclear bomb, just weeks before the expedited enrichment began. According to the International Atomic Energy Agency, the Iranian regime has roughly 2.4 kg of 60 percent enriched uranium and uranium metal on stock, as well as 62.8 kg of 20 percent enriched uranium.

Uranium stockpiles up to 16 times the amount allowed

Its total uranium stockpiles were estimated to be 3,241 kg, approximately 16 times the amount allowed under the JCPOA’s restrictions.

The IAEA provided a report to the Vienna talks last week that included all of these data. The UN nuclear agency was required to publish estimations rather than data acquired directly from facilities in Iran for the first time since the start of monitoring efforts mandated in the agreement, according to the report.

Iran refused to give the IAEA access to surveillance video

The JCPOA allowed Iran to refuse to give the IAEA access to surveillance video at its nuclear sites, but it also stipulated that the recordings would be maintained and released if a future agreement with Western countries was reached.

Despite the loss of visual monitoring, it was commonly assumed that the IAEA was still able to collect data from other monitoring equipment at the relevant sites. The newest assessment from the agency clarified this misperception, demonstrating that Tehran’s obstructionism has been far more extensive, and thus far more harmful than Western negotiators believed.

(PMOI / MEK Iran) and (NCRI): The main opposition to the Iranian regime, the National Council of Resistance of Iran (NCRI), and The People’s Mojahedin Organization of Iran (PMOI / MEK Iran), has been instrumental in revealing details about Iran’s nuclear program.

The IAEA released its latest report

Well before the IAEA released its latest report, its Director General Rafael Grossi warned openly about Iran avoiding transparency, undermining its own credibility, and decreasing the possibilities for a deal that is acceptable to all parties, making this appeasing approach odd.

“It is not possible,” the IAEA chief said of a prospective return to the status quo as it existed before the regime’s systematic violations. “Iran has accumulated knowledge, has accumulated centrifuges and has accumulated material,” and the advancements call for “an agreement within an agreement,” to address the new challenges Tehran has created.

All of this evidence was revealed just two days before the fifth round of discussions in Vienna came to a close. Given this, it’s difficult to see where European optimism about the discussions may come from.

(NCRI) and (PMOI / MEK Iran): has said over and over that Iran has many resources and has no need for nuclear power. The Mullah’s regime goal is to have nuclear bombs.