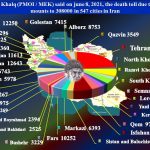 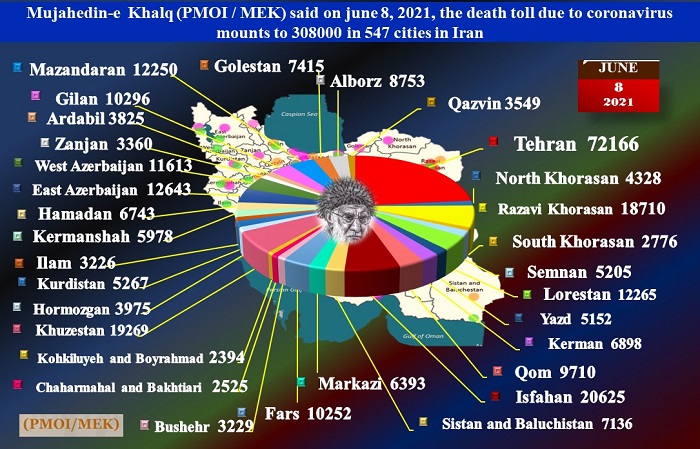 The National Council of Resistance of Iran (NCRI), and the People’s Mujahedin of Iran (PMOI / MEK Iran), reported that the coronavirus death toll in 547 cities surpasses 308,000.

The fifth Coronavirus outbreak has covered the south, and to some extent, the west of the country, and the number of red cities will increase in the next one or two weeks. (State-run daily Arman, June 8, 2021)

Governor of Tehran said: “The number of hospitalizations has remained stable for several days. This indicates the need to intensify protocols”. (State-run media, Khabar-Online, June 8, 2021)

Out of 5.7 million doses of vaccine imported, 4.8 million have been injected. Where are the remaining 900,000 doses? Have they been stolen to be used in election campaigns? (State-run media, Salamat news, June 8, 2021)

Golestan University of Medical Sciences spokesperson said: “An increasing number of people being hospitalized for Covid-19, possibly leading to a new coronavirus wave in this province”. (IRIB news agency, June 8, 2021)

West Azerbaijan University of Medical Sciences spokesperson said: The number of patients was 314 on May 21 but reached 2,157 on June 1, 2021. We are entering the fifth outbreak. (Khabar-Online, June 8, 2021)

(PMOI / MEK Iran) and (NCRI): COVID-19 fatalities in 541 cities exceed 308,000. Tehran in crisis: 8,320 As long as we don’t have a national system to evaluate mutated viruses, we will always be facing threats and we need to definitely provide measures to have an immediate and timely response,” said a senior health official in Tehran.