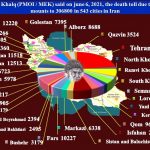 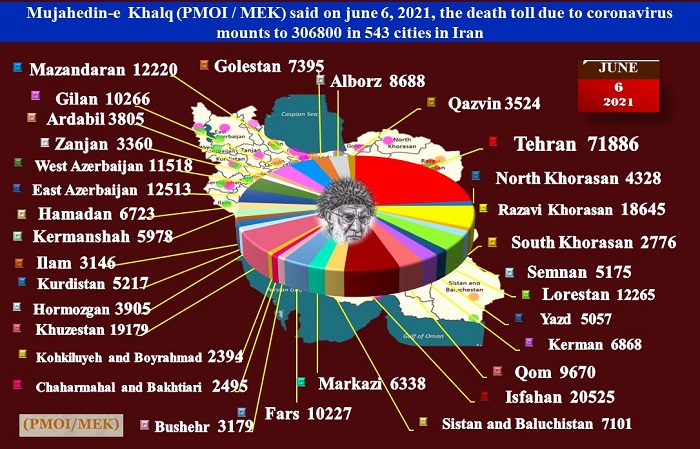 The National Council of Resistance of Iran (NCRI), and the People’s Mujahedin of Iran (PMOI / MEK Iran), reported that the coronavirus death toll in 543 cities surpasses 306,800.

The National Coronavirus Combat Taskforce (NCCT) spokesperson Alireza Reisi said: Given the delay in shipment of the COVID-19 vaccines, we should postpone the next group’s vaccination until the arrival of the vaccines. (State TV, June 6, 2021)

The deputy Governor of Hormozgan Province said: The COVID-19 situation in the Province is critical; the possibility of a fifth outbreak spreading from Hormozgan through the country is not unlikely. (Hamshahri daily, June 6, 2021)

Health centers in Tehran and other cities have announced that vaccines are not available and that people not approach the centers until further notice. (State-run media, Khabar-Fori, June 6, 2021)

(NCRI) and (PMOI / MEK Iran): Health centers across the city of Tehran are putting up signs reading “Out of vaccines.” Other cities are reporting similar conditions. Considering the fact that in provinces such as Hormozgan officials are warning of a fifth peak, the vaccination cycle coming to a halt is quite dangerous,

Shiraz University of Medical Sciences spokesperson said: Due to the completion of the COVID-19 vaccine consignments, until further notice, vaccination will not be carried out from June 6, 2021. (IRNA news agency, June 6, 2021)

(PMOI / MEK Iran) and (NCRI): COVID-19 fatalities in 543 cities exceed 306,800. Tehran in crisis: As long as we don’t have a national system to evaluate mutated viruses, we will always be facing threats and we need to definitely provide measures to have an immediate and timely response,” said a senior health official in Tehran.